James Allan was born in 1856 to a farming family near the mining village of New Monkland about 20 kilometres east of Glasgow, Scotland. He was apprenticed to the Glasgow drapers James Daly, Son & Niven.

Allan came to Australia in 1879 to work for D. L. Brown and Company. This was a growing wholesale drapery business started by brothers Thomas, who remained in Glasgow, and David who came to Brisbane. They owned a number of ships that supplied retail customers as far afield as the South Sea Islands.

The wholesale firm D. L. Brown warehouse at the corner of Margaret and Short Streets.  (State Library of Queensland)

In 1882, Allan commenced a partnership with Robert Stark, who had started a drapery in South Brisbane a few years earlier on his arrival from Scotland. The firm steadily grew and moved from South Brisbane into the city following the disastrous 1893 flood.

Allan and Starks’ Stanley Street South Brisbane building ca 1901 when it was home to a bank and during the 1893 floods. (State Library of Queensland)

Allan and Stark’s South Brisbane building ca 1901 when he was in use as a bank. (State Library of Queensland) 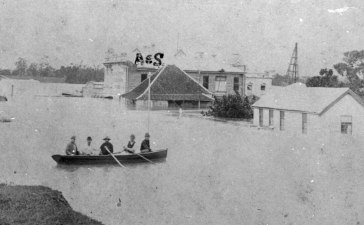 Allan and Stark continued to expand by purchasing adjacent buildings in Queen Street. In 1911, a proprietary limited company was formed, with many staff becoming shareholders and it became a public company on 1913.

In 1885, Allan married Stark’s sister Elizabeth. She was born in Falkirk, Stirlingshire in 1854 and migrated to Brisbane inn the early 1880s. After marrying, the couple purchased one rood, or around 1,000 square meters, of land on Hampstead Road where they established their home.

In 1896 they engaged the architect Robin Dods to design a new home for the site. The result was “Wairuna” which still graces Hampstead Road. Part of their old house may have been incorporated in “Wairuna”. 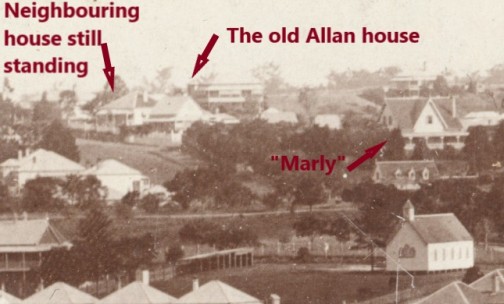 Some time around 1903, Allan purchased his neighbour George Appel’s large house “Marly” and its surrounding land (see my post Sheep, a House and Three Churches ). A section was excised to accommodate Wairuna’s tennis court, and “Marly” was sold to Charles and Christian Chubb in 1911.

In 1905, the family travelled to Scotland where Elizabeth remained for three and a half years while her children furthered their education. Their son Robert Marshall Allan studied medicine at Edinburgh University, received the Military Cross in World War One and in 1929 became the foundation Professor of Obstetrics at Melbourne University.

James Allan was not only a successful retailer, but also a politician. As well as serving on the South Brisbane Municipal Council, he was the Member for the State Seat of South Brisbane and then the first member for Kurilpa after it was created in 1912. He was also active in the YMCA and wrote a book entitled  “A Holiday Ramble in New Zealand”.

Elizabeth was active on the Presbyterian Women’s Mission and was made a life member.

James and Elizabeth lived at Wairuna for most of their married lives, celebrating their golden wedding anniversary there in 1935. In an interview at this event, James mentioned that his old boss back in Glasgow, James Daly, had sent him a Glasgow newspaper every week since 1879! Allan retired as managing director and chairman of the board of Allan and Stark later in 1935 at age 79. 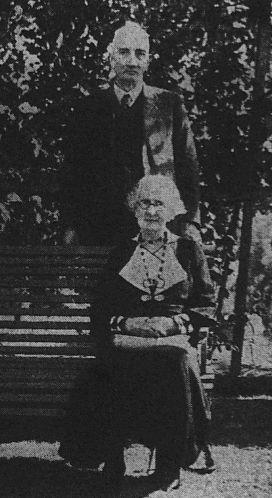 Elizabeth and James Allan on the occasion of their golden wedding anniversary, (Telegraph 4th June 1935, State Library of Queensland)

James died in 1938 and Elizabeth with her daughter Ethel and granddaughter Mary moved out of Wairuna in 1942. Elizabeth died later in 1942. 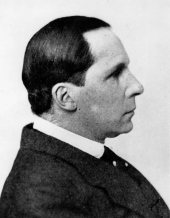 Robert Smith (Robin) Dods was born in Dunedin, New Zealand to Scottish parents Robert Dods and Elizabeth Stodart. After a time back in Scotland where his father Robert died, the family moved to Brisbane where they had relatives. Dods studied architecture in Scotland and eventually returned to Brisbane where in 1896 he joined Francis Hall in a partnership. Dods was active in trying to improve Brisbane’s architecture and advocated an open competition approach to the design of major public buildings.

Amongst his most prominent surviving works are St Brigid’s church at Red Hill and the Mater Hospital. He moved to Sydney in 1913 and died there in 1920.

Construction of Wairuna, commenced in around 1896 and it was completed in 1900.  It has Queensland Heritage listing.

The Arts and Craft influenced design of the house is remarkably modern in appearance for its time whilst at the same time it uses traditional construction methods. A prominent feature is the gabled roof clad with red Marseilles patterned terracotta roof tiles. The high pitched roof is testament to Dods’ belief in the importance of an insulating layer of air over the house ventilated by gablets.

The house is quite deep and has a lantern ceiling over the hall lit by dormer windows and a celestry over an internal conservatory.

The Methodist and Presbyterian Churches started a hostel for service women at Wairuna in 1942 and formally purchased the property in 1943. After the war it was used as a training college and hostel for university students and others.

It returned to private ownership in 1983.

Interestingly, James Allan’s business partner Robert Stark also engaged Robin Dods to design his home, which also still stands at 67 Richmond Road, Morningside, although it has been converted into flats.

The firm of Allan and Stark expanded over the years from its drapery store beginnings to become a full department store. It pioneered the suburban store in Australia with the opening of the Chermside Shopping Centre in 1957. The firm was taken over by Myers in 1959. Myers continued to trade from Allan and Stark’s heritage listed flagship store in Queen Street until the new Myer Centre was built on the other side of the Queen Street Mall. 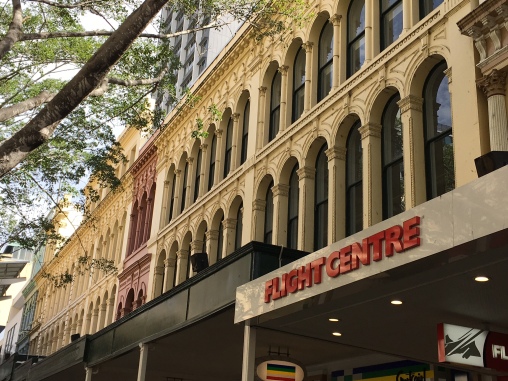 Allan and Stark’s shop “at the smarter end of Queen Street” (P. Granville)

3 thoughts on “James and Margaret Allan and their home “Wairuna””