It’s difficult to imagine the impact on Australian life of two world wars for those of us who didn’t live through those times. The subject of this blog is the local history of Highgate Hill, which had a population at the 2011 census of just 5,824. At the time of both World Wars the population would have been much less. Nevertheless there is frequent mention of our little suburb in newspapers during both wars. To get a feeling for the local impact of these conflicts, I’ve researched just a small sample of newspaper articles mentioning Highgate Hill and some of the people involved.

In the earlier stages of World War One, “Personal Notes” appeared in newspapers.

Paul Trimble received gunshot and bomb wounds at Gallipoli and eventually returned to Australia in 1916. He was discharged from service as a result of these wounds.

As the number of dead and injured rose, regular lists of soldiers dead, injured, missing, reported in hospitals, progress reports and so on appeared in newspapers. You can imagine people scanning these looking for relatives, friends, and acquaintances. Little information on the progress of the war was available due to the censorship of media and of letters from the front.

John Browne of Westbourne Street was wounded at Gallipoli and after time in various hospitals, was sent to France in 1917 and mentioned in despatches. In 1918, by then promoted to Captain, he was repatriated to Australia as “war worn” having been overseas for 4 years. At 42 years old, he was also much older than other junior officers expected to lead troops out of the trenches

Regular reports continued right through until at least February 1920, over a year after the Armistice, with the 479th List. Sometimes these lists brought good news.

only to be followed by bad news.

Prisoners seemed to be treated well, however. Sergeant Cecil Crowther whose parents lived on Dornoch Terrace served at Gallipoli and later in France and was captured at Grandecourt in February 1917. He finally arrived home in May 1919. This photo of him in his POW uniform was published in The Queenslander. 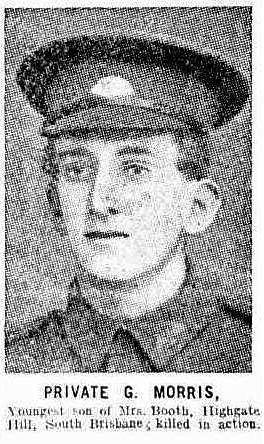 George Morris was just 19 years old when he was killed on the Somme a few months after arriving in France. His mother, widowed after a second marriage,  sent the letter below seeking a keepsake of her son and information regarding his death.

Frank Pearson enlisted in September 1915 and finally returned to Australia to be discharged in June of 1919 after almost 4 years. He served in the 9th Australian Infantry Battalion which was the first ashore on Anzac Cove on April 25th 1915 although this was before Frank joined the unit. The Battalion later fought in Belgium and France.

Roll of Honour sections appeared in the personal columns every day. John Henry Smith of Carlton Street was killed near Montauban in the Somme area  in November 1916. 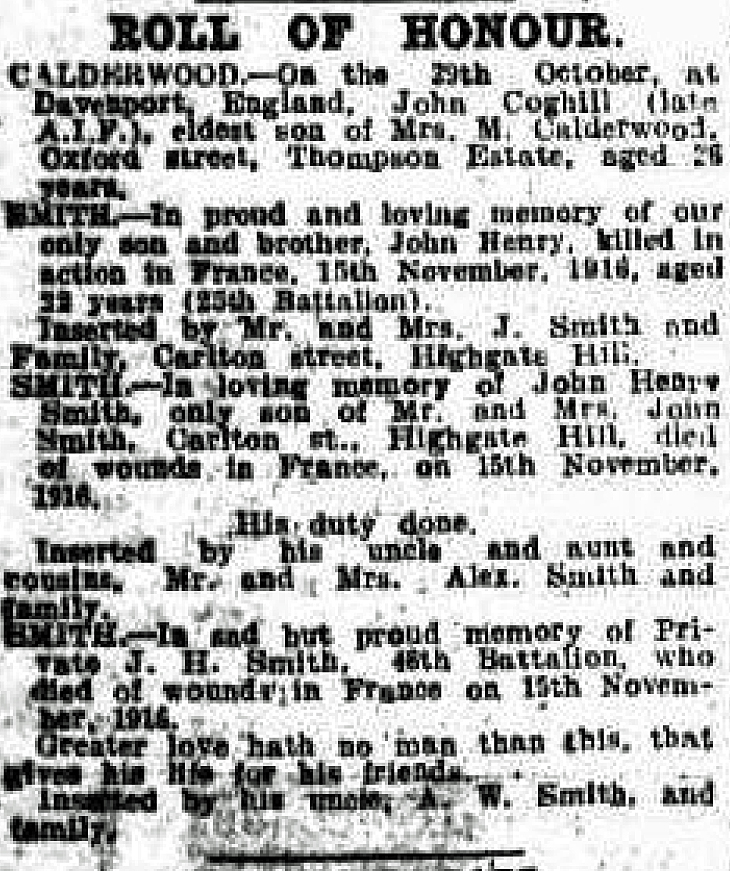 Australian Soldiers in the mud near Montauban, 1916

An interesting example of the patriotism exhibited at the time is that of John Thomson who lived in Daar Lodge at 165 Dornoch Terrace. He was a bookseller with a wife and 4 children, but he enlisted in 1916 evading the age limit of 45 years by stating his age was 44. He was in fact he was 52 years of age. John served with the artillery in France and was wounded in 1918 before returning home.

By 1918, the tide of war had changed and the allies were advancing across France into Belgium. The nation was war weary and there were insufficient recruits to maintain the strength of units fighting in Europe.

Occasionally letters from the front were published to improve morale, no doubt after suitable censorship.  The Armistice was declared just 9 days after this letter was published. 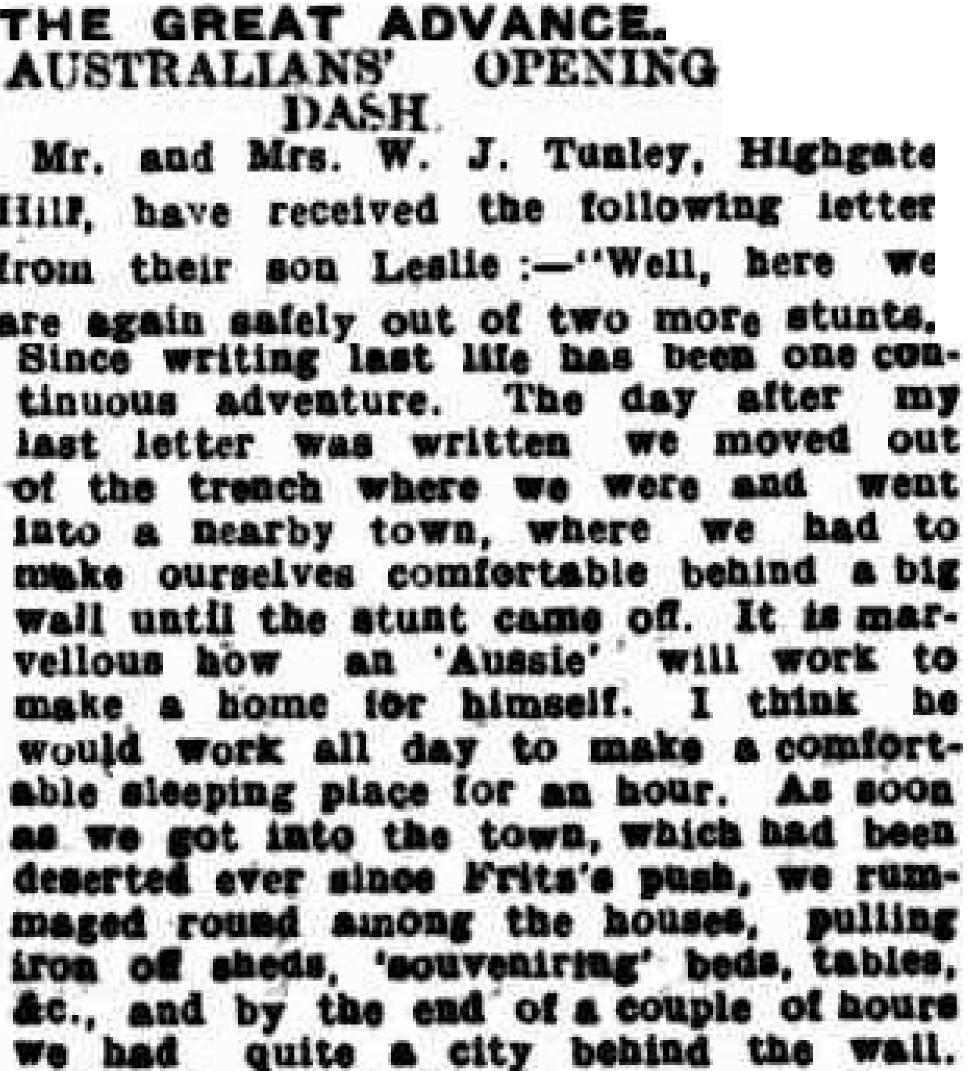 Leslie Tunley interrupted his university studies to join the AIF. He was promoted to 2nd Lieutenant late in the war. After his return to Australia, he recommenced his medical studies and worked as a doctor in Gulgong NSW for 36 years.

The dead and injured in World War One exceeded 216,000 at a time when Australia’s population was only around 5 million. This would be equivalent on a pro rata basis of around 300,000 killed and 744,000 injured today.

The human toll of World War Two was lower with around 50,500 killed or injured, with a further 22,264 prisoners of war. Nevertheless the impact on society was profound and once again numerous references to Highgate Hill can be found.

With Australian troops in action in North Africa from late in 1940, it wasn’t long before  news of the fate of our servicemen began to regularly appear in newspapers. Arthur Williamson’s unit, the 2/6 Field Company, was involved in the Syria/Lebanon Campaign campaign fighting the Vichy French in mid 1941.

All five of the men featured in this article served together in the same unit, the 2/5th Armoured Regiment which for various reasons was never deployed outside of Australia. All were discharged by 1946.

Over 66,000 women enlisted in one of the branches of women’s services, including 27,000 in the Women’s Australia Auxiliary Air Force. The test for recruitment for these wireless operators was sending and receiving Morse Code at over 20 words per minute.

With so many women serving in the armed forces and a lack of accommodation, hostels were established for periods of leave. “Wairuna” in Hampstead Road was established as such a hostel in 1943. Wairuna was originally the home of James Allen, as mentioned in a previous post, James Allen, Brisbane Retail Pioneer 1938

Service Women in Wairuna circa 1943. State Library of Queensland

Wounded Australian troops  were returning to Australia in late 1941, following campaigns in North Africa, Greece and the Middle East. Arthur Burton was discharged early in 1942 having served with 6th Division which fought in North Africa and Greece.

On the 7th of December, 1941, Japanese warplanes bombed Pearl Harbour and the following day Japanese forces began the conquest of Malaya. Following their rapid advance down the peninsula and the fall of Singapore on the 15th February 1942, large numbers of Australians were killed, injured or taken prisoner. Imagine the anguish of the mother who placed this notice.

Both James and Michael Bowe were prisoners of war in Thailand and returned home after the war.

Air raid precautions were instigated in Brisbane, with black out trials as mentioned in another of my posts, Brisbane Prepares for Air Raids.  Slit trenches to provide shelter were dug around the suburbs, including in  Highgate Hill . 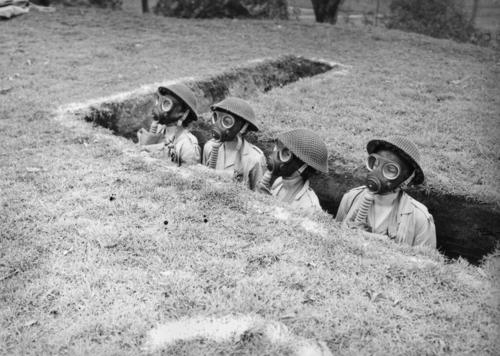 Cadets in a Trench, Brisbane ca 1942 State Library of Queensland

The Dieppe Raid was an ill-fated attempt in August 1942 to seize and hold an enemy held port for a period of time. With over 4,000 allied servicemen killed, the description of the raid as ‘romantic’ in this article seems very strange but was no doubt part of its  purpose as propaganda.

Charles Dulhunty and Godfrey Ball both survived the war, and Ball was awarded an Air Force Cross.

HMAS Perth was a light cruiser that saw service in the Mediterranean in 1940 and 1941. After its return to Australia, the Perth was sunk by a Japanese torpedo in the Battle of Sunda Strait early in 1942.  More than half of the 681 sailors aboard did not survive the sinking and just 214 eventually returned to Australia having been prisoners of war. The fate of some sailors was uncertain even after the end of the war.

With the return of prisoners of war to Australia after the war, life started to return to normal. Newspapers around this time were full of news of engagements and weddings of returned servicemen.

More than 12,000 Australian women became American war brides, most of whom returned to the USA with their new husbands at the end of the war. 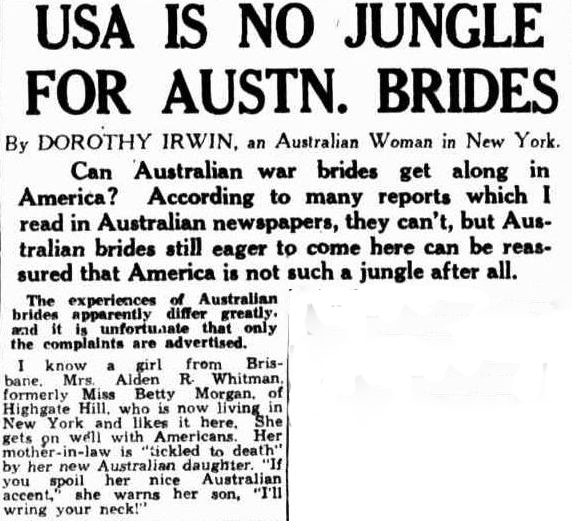 Just 5 years after the end of World War Two, Australian forces were amongst those of 16 countries of the UN in Korea fighting  forces of North Korea, China and other communist countries. The number of Australians who served in the Korean war was around 18,000 with 1,556 dead or injured. Whilst the numbers were a lot less than those of the World Wars, once again the Highgate Hill community was impacted. 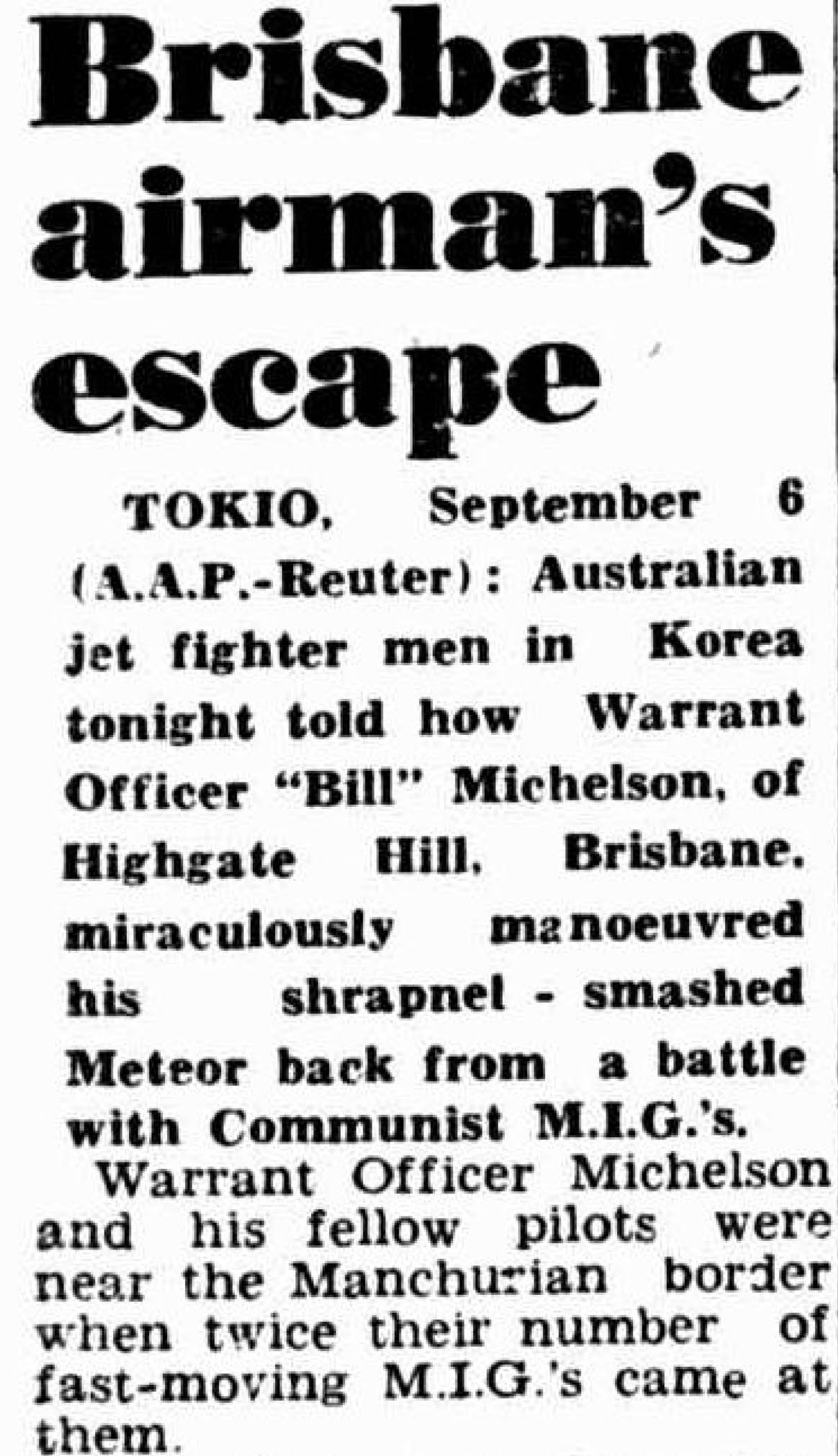 Bill Michelson won a Distinguished Flying Cross during his time with 77 Squadron, RAAF. He returned safely to Australia. In the photograph below showing members of 77 Squadron in front of a Gloster Meteor, Bill Michelson is the 7th from the left in the circle of pilots. The Meteors were outmatched by the MIG 15 but were suited to a ground attack role. Ironically, the MIG15 was powered by Rolls Royce Nene jet engine technology sold to the USSR by the  British Government a few years earlier on the condition that it would not be used for military purposes. 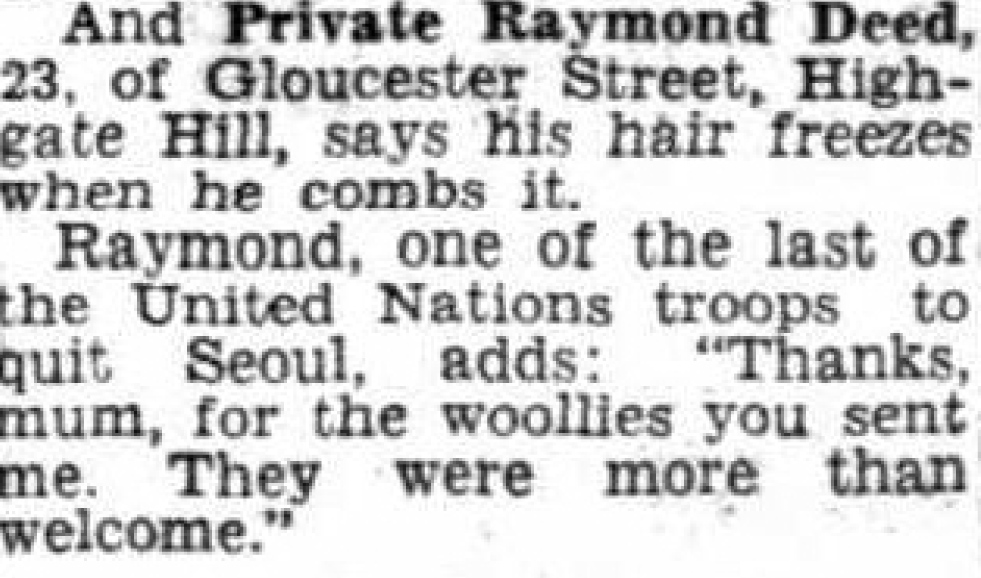 Sergeant Raymond Deed served with the 3rd Battalion, Royal Australian Regiment and was awarded the British Empire Medal. The comment on censorship is interesting. In the previous two conflicts, heavy censorship was in place. The article, War: Censorship and Propoganda gives a good summary of this.

For research in this post into World War 1 veterans, I used the Honouring Anzacs site where you can find digitised copies of service records. For World War 2 and Korea, I used a Department of Veteran’s Affairs site where  service summaries can be viewed.

9 thoughts on “Lest We Forget – Highgate Hill”