My interest in the history of the suburb where I’ve lived now for over 35  years has slowly increased over that time. In researching and writing the posts in this blog, I’ve progressively covered varying aspects of life over the 140 years of European occupation of the land and a little of the time before.  Below I’ve outlined some of that story and included links to posts in my blog. You can also click the “posts” tab to browse the posts.

A Little of Highgate Hill’s History

For the most part, the land that today comprises Highgate Hill consisted of rocky hilly country covered with open woodland. Numerous small streams flowed down from the heights after rain either directly to the river on the southern side or north to swampy West End, South Brisbane and Woolloongabba.

The area was called Bengung-urrung after the frilled lizard. 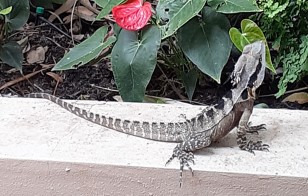 A frilled lizard in our Highgate Hill backyard.

It was a place of hunting where possums, squirrel gliders and wallabies were found. At the edge of Highgate Hill, along the ridge that extended from near Brisbane State High School to the Mater Hospital, was a major habitual camping ground. (South Brisbane War Memorial Park and the Disappearing Ridge) There was a bora ground near the corner of Baynes Street and Hampstead Road although most ceremonial locations were in the Woolloongabba area. 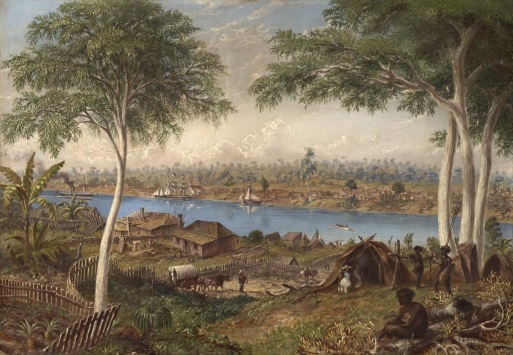 The view from Dorchester Street showing an Aboriginal Camp Thomas Baines 1868 from a 1855 sketch. National Library of Australia.

An early map of Brisbane shows the ancient pathway to the Goodna district traversing Highgate Hill, coming up where today run Hampstead Road and Dornoch Terrace, and then following the route of Gladstone Road. This avoided the steep ridge near Dorchester Street, later cut through Gladstone Road when the tram line was constructed. 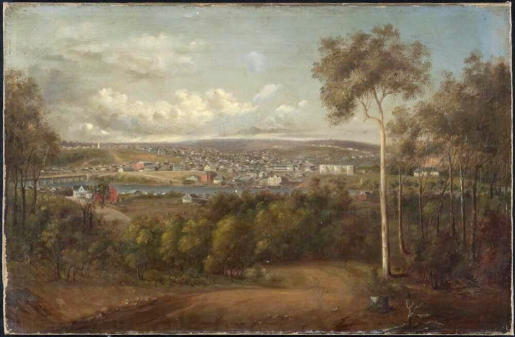 An 1867 view of Brisbane by Joseph Backler, showing the typical vegetation on the hills of Highgate Hill and Woolloongabba. (National Library of Australia)

After the arrival of Europeans, convicts were brought to Highgate Hill to fell timber, which was transported to town by boat. After Brisbane was opened to free settlement in  1842, land south of the town boundary, later Vulture Street ( Vulture Street – From Dotted Line to Bitumen ), was surveyed and divided into portions. These were typically of around 9 acres. They were progressively sold off at Government auctions through the 1850s and early 1860s, usually for around £2 to £4 an acre.

In some cases, the owners established large homes on the tops of ridges. Other blocks were held as investments. Early settlers included the Blakeney family ( The Blakeneys of Highgate Hill )who built two homes around 1862, neither of which have survived. Further down Dornoch Terrace, Captain O’Reilly built “Toonarbin” (Toonarbin )in the late 1860s, still a landmark today. Another early surviving house is that built by the Wilson family near the crest of Highgate Hill around 1864. It still stands in Bellevue Street, though now heavily modified. A  1930 newspaper article on Highgate Hill states that the Wilsons gave the area the name “Highgate Hill”.

The track that was to become Dornoch Terrace with Toonarbin in the background ca 1884. The hillside apart from the O’Reilly property has been denuded. (State Library of Queensland)

Subdivision commenced in the early 1860s, but the take up was slow. The 1880s saw a land boom in Brisbane, and the pace of subdivision and home construction speeded up. ( The Hazelwood Estate, Highgate Hill 1885) As was typical in Brisbane, the streets along the tops of ridges, often named Terraces, saw the construction of many large homes, which enjoyed fine views and cooling breezes. A major impediment to development was the lack of a reliable water supply. As well as the difficulty in obtaining water for household use, fire was a constant risk. (Rat Causes Fire on Highgate Hill 1887) This issue wasn’t solved until the construction of a service reservoir near the top of Highgate Hill in 1889. (Highgate Hill Reservoir 1889) 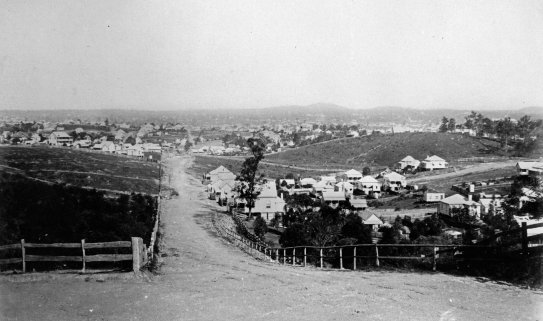 With the increase in local population, shops started to appear from the late 1880s. Most have survived, and many now serve as real estate agents, hair salons, restaurants, coffee shops and private homes. John Garret in his booklet of memoirs recalls the free twist of boiled lollies for children that the grocery delivery man

This old Highgate Hill shop now serves as a residence.

brought with him in the 1920s. The delivery was from Larcombe’s shop halfway up Hampstead Road, which had been established by a previous owner around 1892.

Next door, a butcher shop was started by John Bannon around the same time. There was still a butcher shop there until recent years when it was incorporated into a new development. This was also the location of Highgate Hill’s first public telephone. (From Telegraph To Telephone) It appears in the 1910 telephone directory along with some 20 business and private services in the suburb. In 2020 there was still a public phone in this location.

In the early days of settlement, firewood could be collected from surrounding undeveloped land. Gas reticulation, for domestic light and cooking as well as street lighting, was progressively extended from the late 1880s into the early 20th century. Electric power came to Highgate Hill in the wake of the approval by the State Government for the City Electric Light Company to proceed in South Brisbane in 1916. By the 1920s, home connection was common.

Looking down Dornoch Terrace in 1914. The road is unsealed and there is no electricity distribution. There are gas street lights. (State Library of Queensland)

Drainage remained an issue until the 1920s, as creeks still flowed along their old courses until the completion of large-scale storm water drains. There was a footbridge in Emily Street over the creek that flowed down to the waterholes near Stephens Road until that time. During the 1920s, most streets were also sealed, curbed and channelled.

A sewerage scheme for Brisbane was first discussed in 1904, but construction didn’t commence in earnest 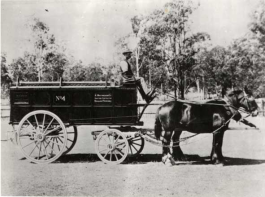 until the 1920s. This expensive work was delayed by the Depression and eventually became a work relief scheme. The night time visits of sanitation wagons finally stopped around 1933 when sewerage work was completed in Highgate Hill.

A horse omnibus service operated to the corner of Brighton and Hampstead Roads from the late 1870s, followed later by a service along Gladstone Road( Brisbane’s Omnibuses , Omnibus Families of the Southside). The latter was replaced in 1901 by electric tram when the line was extended from Vulture Street to Dutton Park.  In 1891, a train station was opened at Gloucester Street as part of the new southern suburban line. (Gloucester Street Railway Station)

One of James Clarke’s omnibuses that ran down Gladstone Rd., 1890. (State Library of Queensland)

Motor buses became common after World War 1, and by 1922 a privately run service was running from North Quay, travelling down Montague Road following an old horse omnibus route. The route was extended up Dornoch Terrace in 1925, as a feeder to the West End tram line. In 1947, the route was taken over by the City council and became the number 29 Dornoch Terrace – Merthyr route.

In this 1953 map, tram routes are shown in green and bus routes in red. (Brisbane City Council)

Musgrave Park became a major location for sport and leisure activities towards the end of the 19th century. (Musgrave Park – The Early Days) Many Highgate Hill residents belonged to tennis, football, cricket, bowls and croquet clubs. Whilst long an informal picnic spot, Highgate Hill Park was purchased by the Council in 1903 and the shelter was erected in 1911. (Highgate Hill Park) The tramway company opened a leisure park at Dutton Park in 1908 which included a swimming pool in the river. Other swimming pools were located at Kurilpa Point and later Davies Park and Musgrave Park.

A new form of entertainment became available in 1912 when Thomas Garrick established the Lyric Theatre on Boundary Street which continued as a movie theatre until it burnt down some 55 years later. (Tom Garrick, Cinema Pioneer)

The lower lying parts of the suburb between ridges grew more slowly than higher locations. Some paddocks were still being subdivided in the 1920s. Most remaining large estates were broken up over these years as well. (Westbourne St. 1930s Architecture)

Torbreck in 1960 (State Library of Queensland)

The 1920s also saw the beginnings of the construction of apartment buildings. Some large homes were divided up into flats as many wealthier residents moved to other locations. (Mon Abri – Brighton Road) After World War Two, migrants from Europe took advantage of low land values and settled in the area. Later, high rise residential development commenced, spearheaded in 1958 when construction of Torbeck on Dornoch Terrace started. (Torbreck) This trend has continued unabated until the present time and most of the grand old houses that once characterised the area have now disappeared.

Many interesting people have made their homes in Highgate Hill. Some of whom I have written about include the following:

A 1930 history of Highgate Hill