On the morning of Christmas Eve 1926, the first train from Sunnybank came to a halt just before Park Road Station at Woolloongabba, waiting for a green signal to continue. Passengers on the left side of the train were startled to see a man and woman lying together partly undressed on a bank next to the railway line.

The fireman got off the train and walked over to the couple calling out “wake up”. Getting closer he saw that they were lying in pools of congealed blood and obviously dead. The train proceeded to Park Road Station shortly after and from there the police were called.

Park Road Railway Station in 1925. The murder scene is in the far background on the right. (State Library of Queensland)

The bodies remained in view of passing train passengers, as well as a gathering crowd, for some time until a tarpaulin was brought to cover them.

Eileen Christie was born to parents John and Mary Christie in 1896.  Eileen had a child, Albert, in 1913 to an unknown father. He was adopted out.

In 1915, a 24 year old James Walsh, a friend of Eileen’s from school days, volunteered to join the 1st AIF. The year 1916 saw him on active service in France with 15th Battalion. He was taken prisoner and held at Limburg for the duration of the war, returning to Australia in mid 1919.

He and Eileen had been close and he soon went to see her after his repatriation. She told him that she was pregnant and that the man responsible had since disappeared. Baby Gladys was born and died in 1919.

Eileen resumed her relationship with Jimmy and in 1920 they were secretly married. Eileen’s mother was against the marriage, at least in part because the Christies were Catholic and Walsh was Protestant.

A child James was born soon after the marriage and a second son Ronald was born two years later. By 1924, the couple had separated and Eileen was living with her mother and other relatives in Stephens Road.

Jimmy unfortunately had a problem with drink and was at times violent.

Eileen had applied for support from him through the court. In her application she had described his drunkedness and violent behaviour. Walsh entered into an agreement to pay support for the children but had fallen behind as he was often unemployed.

Eileen had taken on washing work to make ends meet but fell ill and had a major operation. In a letter to her husband published in “Smith’s Weekly” in 1927,  she talks of bursting stitches on a wound after lifting heavy washing tubs.

The “Smith’s Weekly” article also mentioned letters from Eileen saying that she would return to Walsh soon if he stayed off the grog.

The family moved around between many country postings and in 1923 they were living in Mount Morgan. It was here that Teresa became suspicious of her husband’s activities.

On one occasion when he returned home inexplicably late, she fired a shot with his revolver to scare him. A few years later when they were living in Brisbane, she and her son Stanley managed to open his safe box. There they found letters from a woman in Mt Morgan who had had his child and wanted to leave her husband for him.

She and Stanley began following Marquis and found that he often met women in various places around Brisbane. Stanley was forced to leave home on several occasions after arguments with his father. One was after he had been to see the woman at Mt Morgan and obtained a letter from her describing her relationship with Marquis. At that time Teresa was thinking of obtaining a legal separation.

On another occasion, Stanley spoke to another woman, Mrs. Page, who he had seen with his father and then followed her, trying to find where she lived.

After the murder, a number of love letters and cards from various women, as well as an item of lady’s underclothing, were found in his locker at the Police Station.

The Night of December 23rd 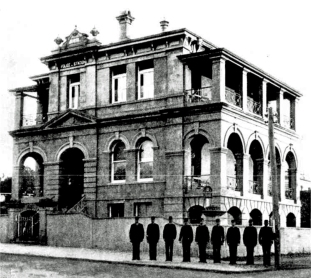 He came home at 6.30pm and left around 7pm after dinner. He was seen at 8pm riding in the front of a tram heading towards Woolloongabba. When he didn’t report into the Police Station at his shift’s end at 10pm, an unsuccessful search was made for him.

His wife Teresa prepared his supper but he didn’t return home. Two policemen dropped in at 11.30pm checking on his whereabouts which remained unknown until the morning’s grisly discovery.

When she didn’t come home, the family searched for her and eventually reported her missing to the police at 2.30am.

Each time he had asked to meet her at the Dutton Park tram terminus which was at the corner of Annerley Road and Cornwall Street,

Various other people reported hearing two or three gunshots, all saying that it was somewhere between 9.00pm and 10pm.

Eileen Walsh probably then sat up and saw the murderer as she was shot below the right eye and the bullet was not under the body. It traversed the brain and passed out of the base of her skull.

One commentator described the position of the bodies as indicating that “they were killed at the height of emotion in an enrapturous embrace”.  There was no sign of a struggle.

Another witness, Stanley Crane, was driving down Annerley Road and saw two suspiciously acting men with a similar description to the two Jamieson had seen, heading away from the jail. He thought though that this was at 9.10pm. 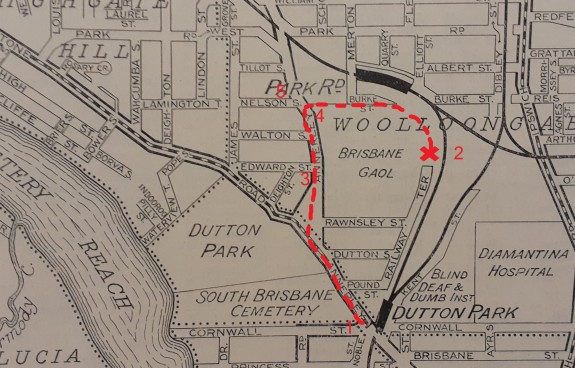 Detail from page 35 of the 1926 Refidex, State Library of Queensland.

Referring to the map above :

Public interest in the case was very high. Investigations took some time as an ever increasing number of Cumming’s lady friends came to light requiring delicate investigation of associated men’s whereabouts on the night of the murder.

As the months passed, there were ongoing calls for a public enquiry. A Magistrate’s Enquiry into the deaths finally commenced in May of 1927 and lasted for around three weeks. There was detailed reporting each day in newspapers around the country.

Eileen’s mother Mary testified that her son-in-law James Walsh has previously threatened Eileen with a razor. Witnesses were able to confirm that he was in Wynnum on the night of the murder.

Marquis’s son Stanley said that he had gone to the Empire Theatre with a friend, Josephine Clutterbuck. She confirmed this and still had the ticket butts.

The enquiry closed on June 17 without any conclusion.

Later in 1927, a woman claimed that her boyfriend, a police constable, had told her on the night of November 23rd that he had committed murder. She claimed he once said to her “I’ll scatter your brains like I did Cumming’s”. This information was investigated however there was no breakthrough in the case.

The Sydney based “Smith’s Weekly” took a strong interest in the case, at times in a bitter contest with its competitor newspaper “Truth”. In mid 1927, the widely read newspaper offered a £500 reward for information leading to a conviction. Numerous people came forward, including a clairvoyant who had information she had received whilst in a trance and a man whose insights came from one of his dreams.

A Mt. Morgan man approached the newspaper, after being advised by his confessor priest, with information that he had sold an automatic pistol to a person of interest in the enquiry. No more was reported on this development.

Articles on the crime appeared sporadically for many years.

James Walsh, the husband of Eileen, didn’t get custody of his two sons.

It seems that he lost all contact with them, as after his death in 1943, his medals from the first World War were returned by the Public Curator to the Army as they could find no living relatives.

In 1951, Marquis Cumming’s son Stanley offered a reward of £1,500 for information leading to the conviction of the murderer of his father. He also passed to the Police several items of new evidence. He stated in a newspaper interview that he always had leaned to the theory that the murderer was one of his father’s lovers driven by jealousy.

The surrounds of the crime scene have changed beyond all recognition. In December 2019, work was underway on a new Metro Station.

Whoever committed the crime, it was clearly a premeditated murder by someone who was familiar with Marquis Cumming’s modus operandi. Eileen Walsh very likely lost her life simply for being his unfortunate companion on the night.

The majority of the related Police files will remain sealed for decades to come. However  even when access is made public, there’s no guarantee that things will be any clearer.

If you fancy yourself as a latter day Miss Marple or Hercule Poirot, write a comment here about who you think “dunnit”!

3 thoughts on “A Mystery Murder of Married Lovers”