The house at 121 Dornoch Terrace has an unusual onion dome style roof feature which often catches the eye of passers-by. My wife heard a story many years ago from elderly neighbours that it was built by a man for his mistress. When I researched the house I uncovered the fascinating story of the Mistresses’ House.

The house is situated on the corner of steep Sankey Street, featured in a previous post, John Sankey and Sankey Street .

Searching through Post Office Directories, I found that there were few houses on the south side of Dornoch Terrace until the first mention of Sankey Street in the 1916/17 edition which shows a Richard J. Kelly living in the corner house. This soon led me to newspaper reports from 1920 of a sensational court case concerning the house “Verdun”, occupied by Annie Sachse but claimed by the executor of Richard Kelly’s will. 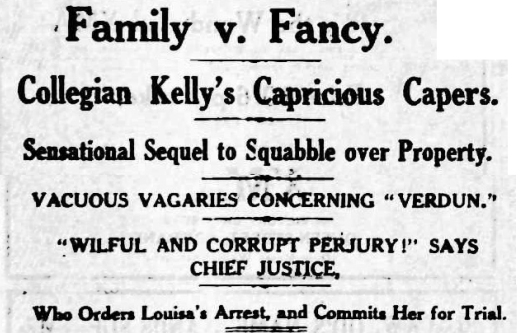 But let’s go back to the start of the story.

Richard James Kelly and Maria Cecilia Cruise married in 1882. They had 5 daughters and 3 sons over the next 16 years. Richard started work as a school teacher around 1880 and in 1885 became the headmaster of St Kilian’s College at South Brisbane. This was located on the site of the current St. Laurence’s College.

In 1890, a quarrel between two boys over a game of marbles escalated into a dispute with the parents regarding Kelly’s punishment of the boys. He was sacked by the administrator of the school, Father Fouhy. Fouhy was unhappy with the way Kelly had dealt with the parents. In particular, one of the boys involved was taken out of the school and was from a “mixed marriage”. As a result he was in danger of not being brought up a Catholic.

After getting no satisfaction from Archbishop Dunne, Kelly sued Fouhy for wrongful dismissal and assault. The rather large sum of £1,500 attracted newspaper headlines.

Kelly lost the case as his employment contract was judged to be on a monthly rather than a yearly basis and he had been given a month’s notice. Also there was no collaborating evidence of assault. Father Fouhy was ably represented by Sir Samuel Griffth QC, at the time Attorney-General of Queensland, co-author of the draft Australian Constitution of 1891 and later the first Chief Justice of Australia.

As well as commercial training in subjects such as short hand and book keeping, the college prepared students for many of the civil service entry examinations that existed at the time. These included the examinations for entry into such diverse occupations as Crown Land Rangers, Railway Apprentice Clerks, State School Teachers, Queensland Pharmacists and GPO messengers.

Annie Louisa Sachse arrived in Brisbane from Germany with her parents and two sisters in 1877, aged 4. Her father worked as a greengrocer for some years at Stanley Bridge, now part of Coorparoo, before the family returned to Germany. There her parents and sisters all died and Annie returned alone to Queensland in 1913 after a seven year absence.

In that year, looking to improve her employment prospects, she responded to an advertisement she saw in the newspaper, no doubt similar to the one above.

At this time, Kelly’s College was based in the Rothwells Building in Edward Street. In previous years the college had been located just up the street in the Temperance Hall operated by the International Order of Rechabites. This was an interesting choice as Kelly was heading towards alcoholism.

Rothwells Building on the left with its twin Rowes Building in Edward Street were constructed in 1885.

By 1914, Annie had completed a number of courses, and Kelly offered her employment as an assistant teacher. She accepted.

Richard Kelly’s drinking problem became worse around this time, leading to his receipt of several letters from his daughter Mary’s solicitor warning him to stay away. She had taken over the mortgage of the family home in Carlton street, Highgate Hill. Mary stated at the trial that her father’s drinking problem had started around 20 years earlier but he had only become violent in 1914. They’d had to call the police to the house on several occasions, prompting the solicitor’s letter.

As a result Kelly no longer lived with or visited his family and his wife Maria was no longer involved in the college.

He started asking Annie if she would move in with him, with comments like “if you don’t look after me I’ll drift into the gutter”. Annie eventually agreed in mid 1914 to live with Kelly and they moved into two rented rooms in Spring Hill. For a while Kelly drank considerably less although he was occasionally violent. During this time Annie wasn’t paid a wage for her work at the college but received free instruction from Kelly. She also ran things as best she could when Kelly succumbed to alcohol.

The house is built

Late in 1914, Kelly had the idea of building a house for the couple to live in. He gave Annie the £207 required to purchase a block of land on Dornoch Terrace in her name and asked her to come up with a design for a house, which was turned into reality by the architect. All payments for the house also went through Annie’s bank account. Annie later testified that this was because Kelly wanted to ensure that the house was seen as clearly belonging to her.

Annie Louise Sachse had original ideas for the house design.

The house, which Annie called “Verdun”, originally had a rooftop belvedere which no longer exists. Another neighbourhood talking point was a leadlight window facing the street featuring Kelly’s initials “RJK”. The image below is an enlargement of a photo of Dornoch Terrace taken in 1920 which although somewhat blurry gives us a good idea of the original appearance. 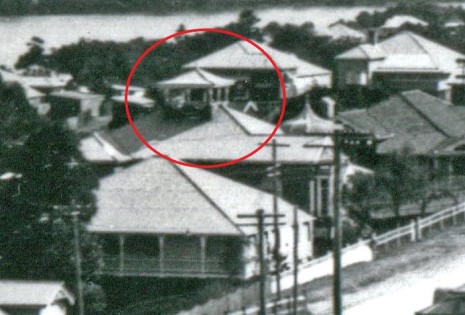 Verdun” is the middle house in this image of Dornoch Terrace, Highgate Hill from 1920. The belvedere (circled in red) is visible at the highest point of the roof. (State Library of Queensland)

Upon completion of the house, which was just a few minutes walk from the Kelly family home in Carlton Street, the couple moved in and lived there until Kelly’s death in 1918. By this time the bailiffs had taken possession of the college and Kelly asked Annie that if anyone came to house, she was to tell them that he was her boarder.

After his death, the family tried to avoid scandal by taking the body and his funeral left from “his late residence ” in Carlton street the following week. Annie continued to live in “Verdun”, no doubt worrying about what the future would bring as the legal process slowly progressed.

Richard Kelly’s estranged wife Maria died just a few months after he did and they are now reconciled in death in their grave at Dutton Park.

Two court cases and a spell in jail

In March of 1920, the court case mentioned at the start of this post took place over two weeks. The executor of Richard Kelly’s will, the family lawyer,  sought to obtain the court’s ruling that the house and land as well as other property and money held by Annie rightfully belonged to Kelly’s heirs.

Annie’s evidence given in court was that Kelly violently forced her into a number of actions, at one stage hitting her head against a wall. These included signing a number of promissory notes in his favour, filling out a transfer for the property to him which he didn’t lodge and making a will leaving the property to him.

This seems to indicate that he was using Annie to hide money from his creditors, although at his death Kelly had no debts. He had been earning some £1,200 a year, a lot of money at the time. Although he had invested in a number of properties, they had been mortgaged and eventually repossessed by the banks.

Annie repeatedly stated that certain documents including some of the promissory notes which appeared to have her signature were in fact not signed by her. The truth will never be known but the presiding judge, Queensland Chief Justice Pope Cooper, made it very clear that he thought that she was lying. She did admit to not telling the truth on a number of occasions when contradicted by other witnesses. 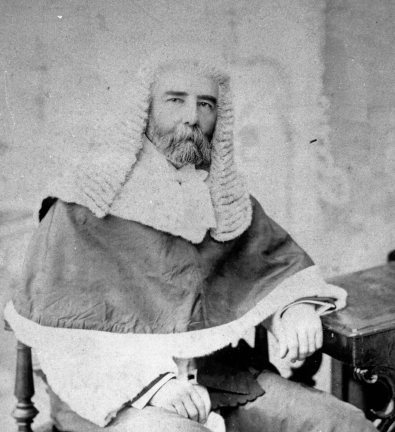 On her lawyer’s advice, Annie agreed to an outcome in which all the property and monies in question were determined to be not hers but held in trust for the estate of Richard Kelly.

The result was devastating for Annie. All she ended up with was what was left of the £250 that Kelly had specifically bequeathed to her in his will after her lawyers took their fee, a few items of furniture and a Dodge motorcar. She originally claimed that she had purchased the car with her own money and later said that Kelly had given it to her as a Christmas present.

One newspaper reported that during the lawyers’ conference to agree on the final outcome Annie was seen “weeping hysterically” in an ante-room. The cards were stacked against her, being a German less than two years after the end of the First World War and having gone beyond what society then considered was morally acceptable behaviour, especially for a woman.

She was committed to trial by Judge Cooper for “wilful and corrupt perjury” and was taken directly to Boggo Road Gaol. The title to the “Verdun” property was vested in the trustee and executor of Kelly’s will by Supreme Court order and subsequently transferred to Kelly’s children.

The quadrangle of the women’s goal at Boggo Road, 1912. (State Library of Queensland)

The perjury case was held two months later before Justice Charles Chubb who coincidentally also lived in Highgate Hill in his villa “St Malo” on Hampstead Road. The land is now occupied by a nursing home. Chubb was very sceptical of the charges and the flimsy evidence. On the second day Annie was found not guilty by the jury.

Annie Sachse’s time with Kelly literally gave her a job for the rest of her life! In early 1921 she started her own school in George Street that she called the “Central Training College”. By 1927 she seems to have been doing quite well in this enterprise.

For many years she included in her advertisements “late teacher Kelly College” but eventually dropped that in the 1930s. She continued to run her college in the same location for 30 years until 1951 and passed away two years later at around 80 years old. Annie never married and she lies in an unmarked grave at Mt. Gravatt Cemetery.

Kelly’s children sold “Verdun” to the Lutheran Church in 1923 continuing the German connection and another chapter in the history of the house began. You can find this in another of my posts, The Pastor’s House .

An image of the house from the book “One hundred years of the Lutheran Church in Queensland ” by F. Otto Theile 1938 (TROVE)

6 thoughts on “The Mistresses’ House”