Early in the morning of Good Friday in 1938, a bottle collector found the dead body of 32 year old Mary Emmett in a rockery near Brisbane Girls Grammar School on Gregory Terrace, Brisbane. 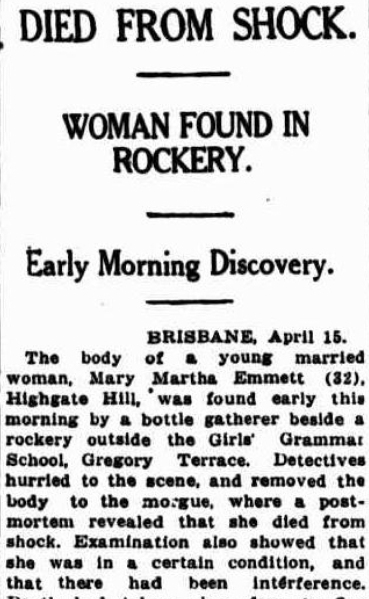 The police soon came to the conclusion that her body had been placed in the rockery after her death. Further, she was carrying a considerable amount of money. Their belief, following an autopsy, was that she had sought an abortion, then illegal in Queensland, and that she had died as a result of the procedure.

Mary lived with her husband Thomas and their three children in Franklin Street, Highgate Hill. The youngest child was just 20 months old and Mary had almost died during this previous pregnancy. She had been advised to have no further children, however she fell pregnant again and had already been treated for heamorrhaging.

When she said that wanted to have an abortion, Thomas Emmett gave his wife what money he had and she borrowed the rest against an insurance policy. Mary told her husband Thomas that she would be going to Oriel Road although she didn’t know who she would be seeing there.

Suspicion fell on society doctor Victor Wilson as it seemed that Mary Emmett had had an appointment in the T&G building where Doctor Wilson’s surgery was located. He also practised from his home in Oriel Road, Clayfield. 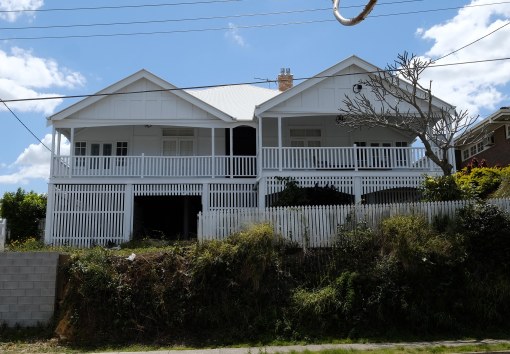 Both Doctor Wilson and his sister-in-law and assistant Gladys Tuesley were called to give evidence at the coroner’s inquest. 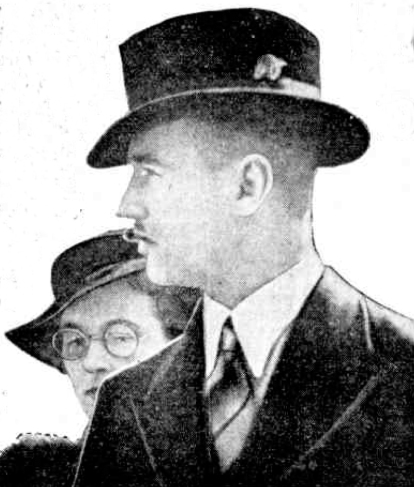 Newspaper reports referred to the fact that Victor Wilson and Gladys Tuesley were already well known to their readers through the detailed reporting over two years of divorce proceedings instigated by Wilson’s wife and Gladys’s sister, Mary Wilson.

At the inquest, detective Frank Bischoff, who had conducted much of the investigation, stated that he believed Mary Emmett had died at Wilson’s Oriel Road home but that there was insufficient evidence to sustain a criminal charge.

Both Wilson and Tuesley denied any knowledge of Mrs. Emmett and the inquest closed without result.

Thomas Emmett, a wharf labourer, was left with three small children to bring up. However, he remarried four years later in 1942.

Newspaper reporting of the private lives of Doctor Victor Wilson,  his wife Mary and new partner Gladys continued to appear in newspaper reporting for decades. In a custody battle over their three children that Victor eventually won, the judge commented that neither was a suitable parent. There was reporting on tax evasion, gambling debts, bankruptcies and alimony payments.  The two sisters Mary and Gladys took a dispute over ownership of a racehorse to the Supreme Court.

Wilson was also implicated in other abortion cases.

Frank Bischoff, the detective investigating the case, rose through the ranks to become Queensland Police Commissioner in 1958. He retired suddenly in 1969 and shortly later evidence of corruption relating to gambling was made public. He was charged with stealing but the government decided not to proceed. 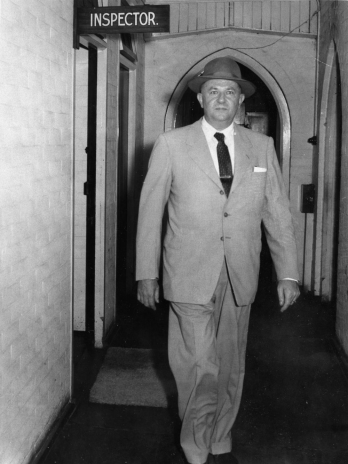 Eighty years later in 2018, abortion was still illegal under the Queensland Penal Code of 1899. However, as a result of the precedent of test cases over time, it was considered lawful in the prevention of serious danger to physical or mental health.

In October 2018, the Queensland Parliament passed a bill moving abortion from the penal code to health regulations.

8 thoughts on “The Forlorn Death of Mary Emmett”