An article “They Get Around Nowadays” published in the Brisbane Sunday Mail in 1947 described a number of unusual occurrences of young children wandering about by themselves. The tone was one of amusement, whereas today it would more likely be one of disbelief with strong criticism of the parents. My title for this post refers back to a previous post in this blog, Animals on the Loose in Highgate Hill .

The first incident was when four year old Marjorie Gates of Dornoch Terrace decided to catch a tram into the city to “see the pretty gold fish in the gardens”. Marjorie lived near the corner of Hampstead Road and Dornoch Terrace and would have walked up to the tram stop on Gladstone Road.

She seems to have made it into the city but was picked up by the police before she could see the fish.

Children in the Brisbane Botanical Gardens, 1938. (State Library of Queensland)

Another four year old, John Read of Orleigh Street Hill End, had recently started attending Ironsides State School across the river at St. Lucia rather than the nearby West End State School. He travelled by himself everyday using the ferry that ran across the river and then by bus to the school.

A couple of weeks after starting school,  he caught the wrong bus coming home and ended up heading towards the city along Coronation Drive.

The bus driver asked him where he lived and dropped John off at the Grey Street bridge, the closest point along his route. John walked across the bridge with “a lady” and from there it was child’s play for him to find his way home over the last 3 kilometres.

The longest trip mentioned in this article was that of 10 year old Donald Quinn. His mother put him on board the SS Marine Phoenix bound for Sydney at San Francisco .

She sent a telegram to the Travellers’ Aid Society in Sydney asking them to pick him up from the wharf and put him on a train to Brisbane where he would be met by his grandmother who lived in Merton Street, South Brisbane. 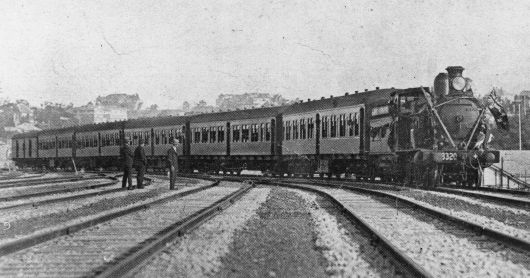 A Sydney train arriving in Brisbane 1938 (State Library of Queensland)

The Australian Travellers’ Aid Society was founded in 1916 and still exists today  assisting travellers with special needs. It was based on organisations founded earlier in other countries.

Going back to 1930, 12 year old Roberta Thallon made the news by disappearing for 3 days after being chastised by her father for spending £2. She’d left her home in Chester Street, Highgate Hill and headed to Wynnum. There, posing as an orphan, she just missed getting a job as a live-in child minder, as the job had been given to someone else. She then went door to door seeking employment and a kindly shop keeper offered to organise accommodation for her. This resulted in her identity being discovered by the policeman asked to assist. 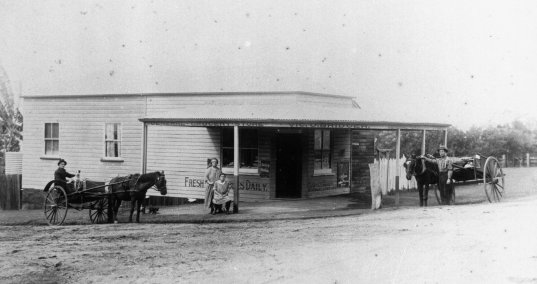 A corner shop in Wynnum ca 1930 (State Library of Queensland)

A few days later she was missing again for a few days and eventually picked up back in Wynnum.

Her maturity and confidence were belied by a diminutive stature of just 4′ 2” or 127cm. She seems to have left it at two attempts as there are no further reports of her escapades.

Stories like these make us realise how much life in Brisbane has changed since those more innocent times.