The Brisbane River has formed not just a physical division, but a cultural one as well from the early days of European settlement. This geographic preference for one side or the other persists today amongst many residents. My own family has lived on the south side for many generations, and we still venture north of the river only when absolutely necessary !

The division has its beginnings in the early days of free settlement around 1842. Before then, free settlers were not allowed within 50 miles of Brisbane. Squatters soon took advantage of the changed situation and commenced shipping their bales of wool from Brisbane. This avoided the long overland route to the south.

The commandant insisted that the squatters and their men stayed on the south side of the river to separate them from the remaining convicts on the north. It wasn’t long before sly grog began to be sold from the few shops established near the southside wharves. The sale of alcohol was banned until 1843 and the number of hotels increased with increased shipping and commerce.

An early visitor who recorded his impressions was John Sweatman who sailed on H.M.S. Bramble on its journeys surveying Torres Strait. The ship called into Moreton Bay in 1846. He wrote, “South Brisbane I did not see much of, it is much more scattered and ill built and altogether “lower” than North Brisbane”.

Another writer in 1859 recalled his first visit to South Brisbane in the 1840s.

“Passing up the road leading from the water side, in the direction of the accommodation house, we were at once in the midst, pell mell, of bullock bows and yokes wielded and hurled in fearful proximity to our persons. Yells of fiendish blasphemy were uttered on every side, whilst a woman, with her front teeth knocked out from the blow of a yoke, shrieking for help in the midst of this rum maddened throng. The Chief Constable, poor old White, in vain assayed to stop the murderous affray, assisted by his meagre staff of convict constables; and it was not until the military guard from the barracks reached the spot that the riot could be suppressed. These matters were far from infrequent occurrences.”

For some 10 years, South Brisbane was the principal shipping centre of the small town. Further, land prices on the north side increased rapidly leading to growth across the river. Meanwhile, the administration of the district, and from 1858 the new colony of Queensland, grew from the nucleus of the convict settlement on the north side of the river.

The South Brisbane Wharf area in 1868. (State Library of Queensland)

The financial crisis of 1866 caused by a colonial government spending beyond its means hit southside shipping activity heavily. A flood in 1869 destroyed the only cross river bridge further dampening growth, until the first Victoria Bridge was finally completed in 1874. Even then, development was slowed as much of the land in South Brisbane had been mortgaged by the Council to finance the building of the bridge. My post, The Fascinating Story of the First Victoria Bridge , explains the story behind this.

Rural South Brisbane in 1867 with Parliament House visible across the river. (State Library of Queensland)

A tongue in cheek article from 1875 contains many references to the divide as it existed then.

The northside continued as the centre of colonial government and the location of most commercial offices. Those working in white collar jobs were much more likely to live on that side of the river due to the lack of bridges.

The southside away from the wharves at the time of writing this article was more rural in character. Later, with the development of Brisbane’s deep water port (see another post in this blog Gloucester Street Railway Station ), the southside was the home of workers at the port and nearby factories. 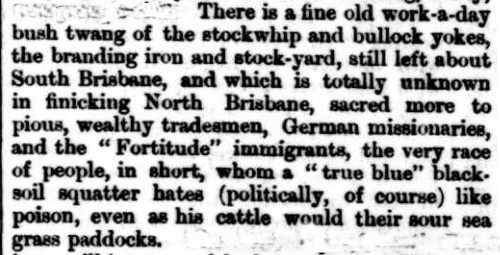 The writer’s humour descends to condescension. 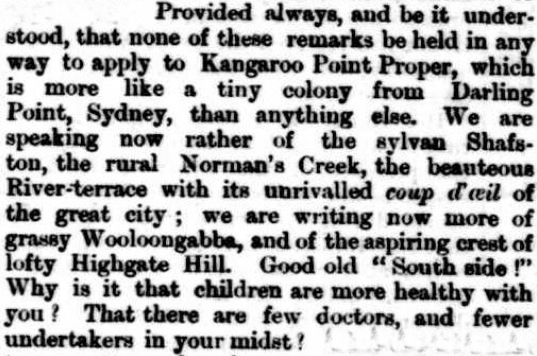 The columnist was none other than Nehemiah Bartley and much of the same text appears in his book “Australian pioneers and Reminiscers”. he ends with the comment – “Gentle reader, let us here assure you that we own no land on the South side ; that we don’t live there ; and don’t go there once in seven years, on an average.

And so, dear old South Brisbane, farewell for the present, and may the days be many and long withal, ere branch banks and shilling ordinaries, free counter-lunches and Board-of-health wagons, railways and cab-stands, and all the other delightful agremens of “civilisation” invade thy quiet precincts and primitive haunts. We would fain have thee remain as thou art, innocent of all “progress”, for it is indeed not everywhere that one can travel 500 miles from home, by simply crossing a lone bridge with a penny toll.”

In 1884, after the completion of a railway line to the wharf area, a coal facility was established on the south-side, further enforcing its industrial nature (see my post Gloucester Street Railway Station ).

South Brisbane was also a separate local government area from 1888 until its amalgamation into the City of Greater Brisbane in 1925, further reinforcing the divide. The South Brisbane Municipal Chambers still stand on Vulture Street and now form part of Somerville House school (see my post South Brisbane War Memorial Park and the Disappearing Ridge )

This page has further reading on the cultural divide.

4 thoughts on “The Southside of Brisbane”