Early in 1930, a series of unusual headlines appeared in newspapers around Australia.

In 1929, sisters Valerie, Edith and Wanda Ruthning took their Dornoch Terrace dentist neighbor to the Queensland Supreme Court to seek an injunction forbidding him to keep roosters on his property. 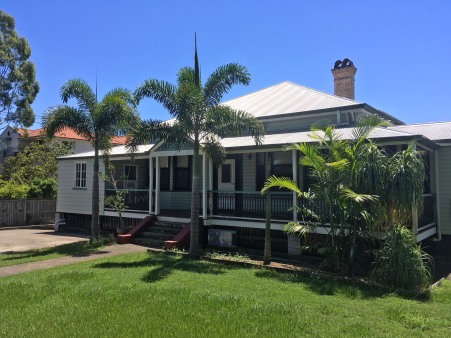 The roosters resided at “Stranville” in Dornoch Terrace. The Ruthning sisters’ house stood to the left.

Following complaints about the fowls’ “loud, shrill and continuous” crowing preventing his neighbours sleeping,  Thomas Terran Ferguson had agreed to destroy the roosters but wished to wait until after the Brisbane Royal Queensland Show in August. This led to some heated exchanges including comments regarding his aged father who kept the birds and as a result he retracted his offer.

A rooster at the Royal Queensland Show or “EKKA”

The Ruthning sisters were successful in gaining an injunction, and also received costs of 40 guineas (about $3,000 allowing for inflation). Not to be cowed by this result, Ferguson appealed the decision in the Supreme Court.

The Supreme Court Building in George Street, Brisbane. It was badly damaged by arson in 1968 and demolished in 1976. (State Library of Queensland)

There were some bizarre claims in this appeal. For example, Ferguson claimed in his affidavit that Doctor Lilian Cooper, a friend of the sisters,  had admitted to him that the sisters’ sleeplessness could be influenced by spiritualistic conversations with their late mother. Doctor Cooper was Queensland’s first female doctor and had had a very interesting career . She denied the claim in her affidavit.

In any event the three Queensland Supreme Court judges who heard the case found in favour of Doctor Ferguson.

In response to this, the Ruthning sisters took the case to the Australian High Court.

This court has its basis in the Australian constitution. As well as hearing cases on constitutional law, it is also the final Australian court of appeal. Up until 1975, further appeals to the British Privy Council were possible.

The High Court refused to hear the case. Mr. Justice Isaacs stated : “There is no question of law to be argued. It is merely a question of the preternatural vocal vigour of these roosters and the sensitivity of these ladies.”

In the following year of 1931, Melbourne born Sir Isaac Isaacs became the first Australian Governor-General. This was despite disquiet from King George V who disliked the break from the tradition of appointing British aristocrats to the post.

The Ruthnings and Fergusson appear to have continued living side by side for some years after these events.

A description of the case, with some original material, can be found here.

After Ferguson’s death,  his home Stranville  was renamed “Flamingo House”, became student rental accommodation and was the home of some future prominent Queenslanders such as Premier Anna Bligh and Chief Stipendiary Magistrate Di Fingelton.  Numerous community groups were also based there.

When I was a child in Brisbane, we had a Bantam rooster which was allowed at the time. Now Brisbane City Council regulations  forbid roosters in urban environments. There are still many hens in Highgate Hill and West End backyards.