A short article appeared in the Brisbane newspaper ”The Daily Mail” in March 1924.

The first electric tennis tournament to take place in Brisbane will commence at 7 o’clock tonight, at “Tarong Flats” Highgate Hill. This tournament is being controlled by Messrs. Taylor and Wilson, who are donating all profits to the Children’s Hospital.

Tennis was introduced to Australia in the 1870s and the Queensland Lawn Tennis Association was formed in 1888. Initially, most courts were located in the grounds of larger houses, but public courts were soon marked out in parks and gardens. 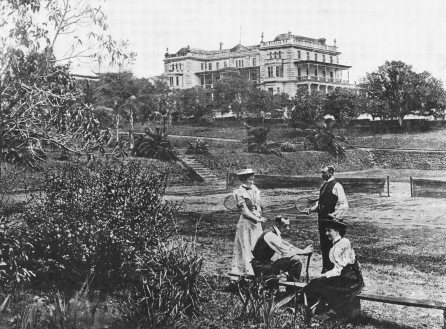 As courts lacked surrounding netting and as a consequence the game was played in a leisurely manner, tennis was one of the few sports deemed socially acceptable for ladies and in which men and women could participate jointly.

The popularity of the game continued. During the 1920s depression years, my grandfather built a court behind his house at Annerley as a money making venture . He told me that the popularity of tennis was such that right through those years his court was always fully  booked with players paying sixpence each per booking.

A game of tennis at my grandparent’s house Annerley, 1940s

With advances in electric lighting technology early in the 20th century,  lighting of tennis courts became practical allowing the game to be played in the cool of the evening and on weekdays after work. I remember my sister and I going along with my parents one night a week for tennis in the 1960s. This  was also an occasion for kids to have fun in semi-lit suburban backyards.

As there was no specific uniform for tennis, there was some freedom in the style of dress. By the time of this article, costumes worn by tennis players were starting to become a little more practical than those in the 1905 image above.

Alice Marble from the USA, winner of  18 grand slam championships, broke with all previous conventions by wearing shorts in 1932.

The location of the night tournament mentioned in the article as “Tarong Flats” refers to the large house in Blakeney Street of that name, at that time divided into flats. Further detail of this house can be found in a previous post –  A Strawberry Afternoon Tea Highgate Hill 1905.

Doctor A. Jeffris Turner, a long time resident of Highgate Hill, was closely linked to the Children’s Hospital which was to receive the profits of the tournament. You can read more about his interesting life in another post in this blog, Doctor A. Jefferis Turner.

One thought on “Tennis”