Amongst the first Europeans to make their home on Highgate Hill were members of the Wilson family, who arrived in Brisbane from Glasgow via Sydney in 1864 on board the paddle steamer “Lady Bowen”. Alexander was born in Glasgow on the 5th June 1857, the fifth son of George Wilson and his wife Margaret Watson. George is variously described as working as a silk manufacturer and merchant, in Treasury and in the “Lithographic Department”.

The Wilson home in Bellevue Street. (The Queenslander, 4 February 1932 via Trove)

Alexander attended the Normal School at the corner of Adelaide and Edward Streets. It had been established in 1860 to raise the standard of education in the new colony of Queensland.

He demonstrated talent as an artist from an early age. As a 17 year old, he attracted praise for his entries in an exhibition at the School of Arts.

Wilson joined the Buildings Branch of the Queensland Department of Public Works in 1875 as a clerk. Later, he worked as a junior draftsman for fellow Scot and colonial Architect Francis Drummond Greville Stanley. He was promoted to second draftsman within two years. Working for Stanley, Wilson prepared drawings for Fort Lytton. This work was done by Stanley as part of his private practice.

In 1881, Stanley left the public service and started his own architectural practice. Alexander joined him in the following year. An early highlight was his winning the prize for completion of the west face of St Stephen’s Cathedral in 1882.

In 1883, Wilson returned to Scotland where he studied in Glasgow for admission as an Associate of the Royal Institute of British Architects (RIBA).  In this time, he also worked briefly with various architecture firms. He passed the examination in 1884, becoming the first Queensland member of the RIBA.

Wilson returned to Brisbane to set up his own practice in Queen Street in August 1884 . The timing was perfect as a land boom was sweeping across Eastern Australia. A large inflow of investment capital from Britain led to increased competition in banking and readily available loans for land purchase and home construction.

The publication “Queensland Architects of the 19th Century”1 lists some 17 houses designed in 1884 and 1885 by Wilson. However there were other commissions including the Wesleyan church in Vulture Street in 1884. Wilson won this via competition in that year.

In 1884, Wilson designed the Vulture Street Wesleyen church which was completed the following year. (P. Granville)

Many houses in Highgate Hill and adjacent suburbs were of his design but only a small proportion survive. For example on Dornoch Terrace, of 5 houses including that of his brother Thomas, as well as a church, only “Kinauld” survives.

This was designed for Mrs. Catherine McIntosh, an old family friend and fellow early settler on Highgate Hill, to replace an earlier home of the same name. 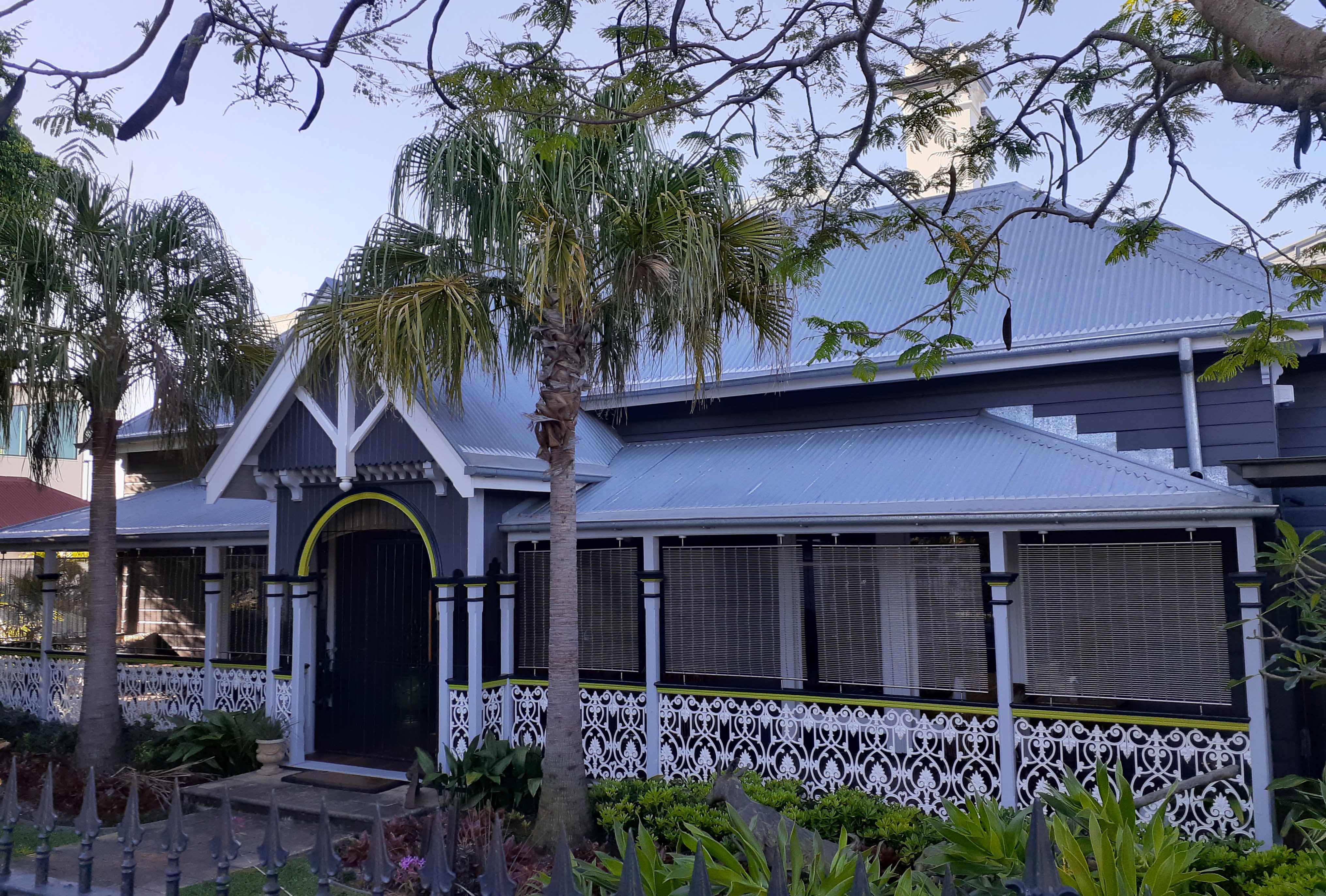 He also designed the Sankey family home “Kitlby” (see my post Sankey Street, Steeped in History ). A number of Wilson’s domestic designs from the 1880s boom years do survive.

Glenugie is one of a number of large homes from the 1880s along  Moray Street, New Farm. In contrast to the others, it’s built from wood rather than brick. Wilson believed that wood was preferable in Brisbane’s climate as unlike brick or stone, it did not retain heat. He designed it for James Davis in 1884. From 1930 until 1980 it served as a hostel for girls run by the Presbyterian and Methodist churches. Today there are only glimpses of the house through thick greenery. 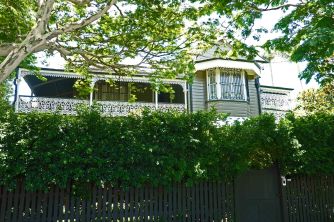 In 1885, he designed a row of four investment cottages on Merton Road Wolloongabba for Mrs. Richardson, wife of South Brisbane draper George Richardson. The four houses were built on a single 34 perch (880 square metre) block. This was before the the Undue Subdivision of Land Prevention Act of 1885 required a minimum of 16 perches per dwelling.

This row of 4 houses, two duplex, were constructed on Merton Road around 1886. (P. Granville)

Opposite Musgrave Park (Musgrave Park – The Early Days) in Edmonstone Street is the the house “The Quinta”, built for Mrs. Harriet Lamont in 1885. Her husband Alexander was a barrister and politician with business interests including the Bengal Chutney Company. This was one of many homes built in South Brisbane when the “Bridge Lands” used to finance the Victoria Bridge were finally available for development. (see my post The Fascinating Story of the First Victoria Bridge).

The house “Capemba” in Taringa was designed by Wilson for the brilliant but eccentric meteorologist, Clement Wragge. He installed an astronomical observatory next to the house. Wragge left Australia in a huff in 1903 when not selected for the role of inaugural Commonwealth Meteorologist. 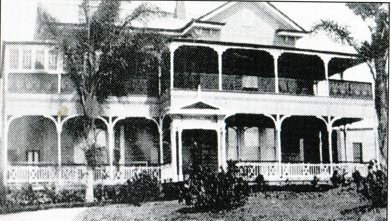 “Tarragindi” built for W.D. Grimes in 1889. (State Library of Queenland)

Many of the larger houses share a similar gable decoration to that seen on “Kinauld” above.

The Wilson home “Eversleigh” at Yeronga. (Queensland Architects of the 19th Century)

In 1885, Wilson married Ellen Mary Watt (Nellie) Martin. They moved into a new family home at Yeronga that he designed called “Eversleigh”. He later had a second floor built to accommodate his growing family.

One of his larger domestic designs was the impressive home of his father-in-law, auctioneer and agent Thomas Martin. “Hayslope” stood on the river at Tennyson from 1887 until it was demolished to make way for the Tennyson Power House in 1949.

Wilson was a founding Fellow of the Queensland Institute of Architects from 1888, serving as its honorary treasurer from 1889 to 1896 and its president for four terms between 1899 and 1923. He was later elected an honorary life member of the Institute. 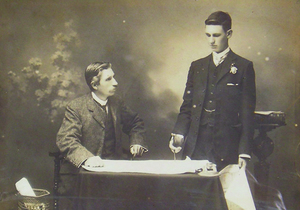 In addition to domestic works, the 1880s also saw a number of commercial and ecclesiastical commissions, some of which have survived. These include the Plough Inn and the adjacent Allan and Stark Drapery, both built around 1886, in the heyday of South Brisbane as a commercial centre. 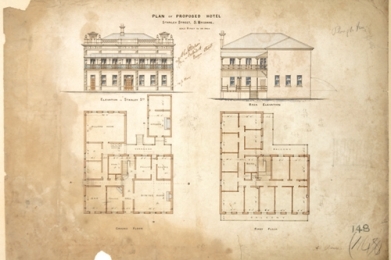 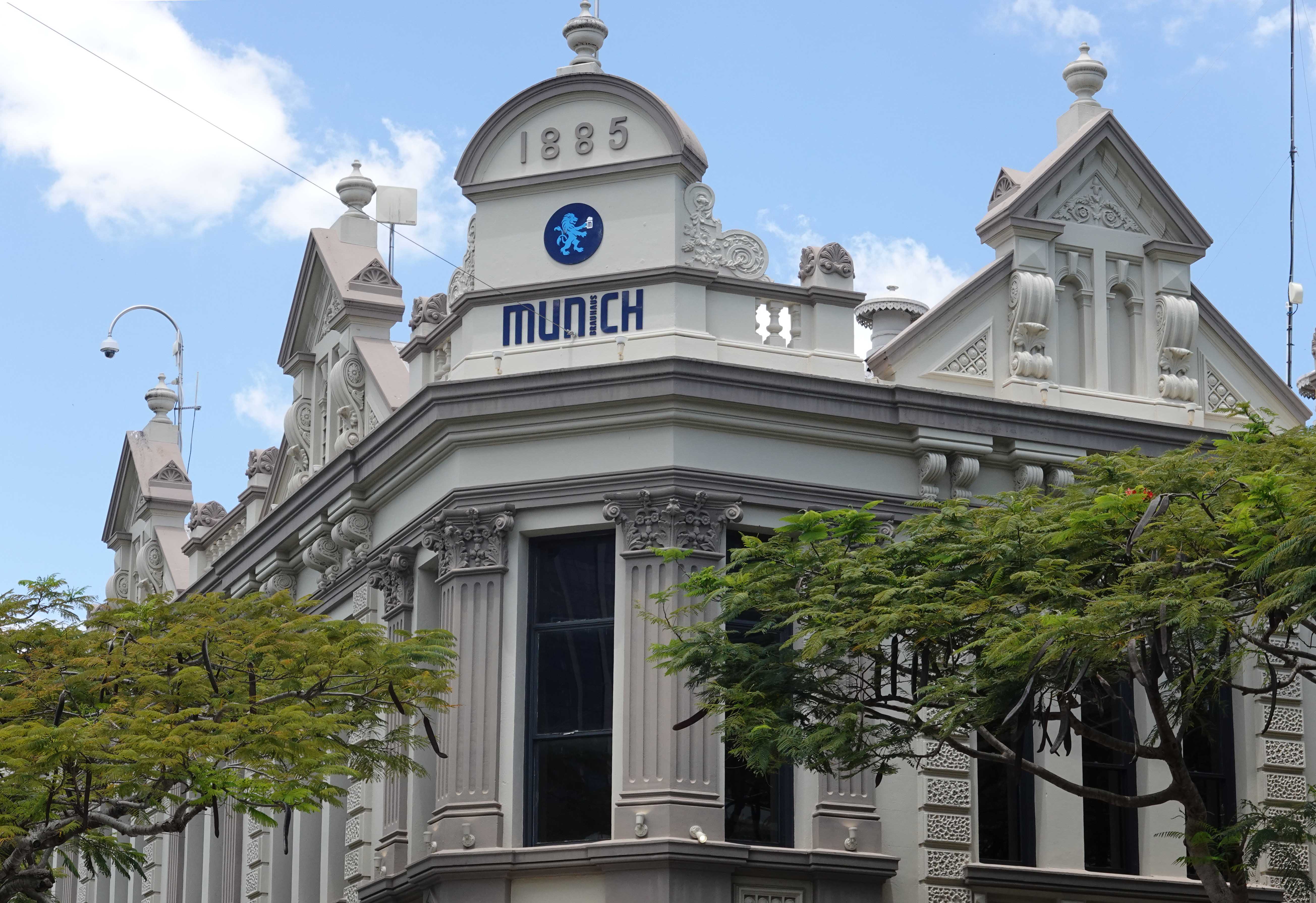 In the city, the Edward Street warehouse designed for Webster and Webster in 1886 is another attractive example of Alex Wilson’s work from this period. It had varied occupants over the years including a ships’ chandlery, the Salvation Army and the Brisbane and Area Water Board.

The Mowbraytown Presbyterian Church was erected in late 1885 on land donated by Williamina Mowbray, widow of the Reverend Thomas Mowbray. The leadlight windows at the front of the church were donated by Wilson, who also designed extensions and adjacent halls. He and his family attended the Mowbraytown Church for decades. 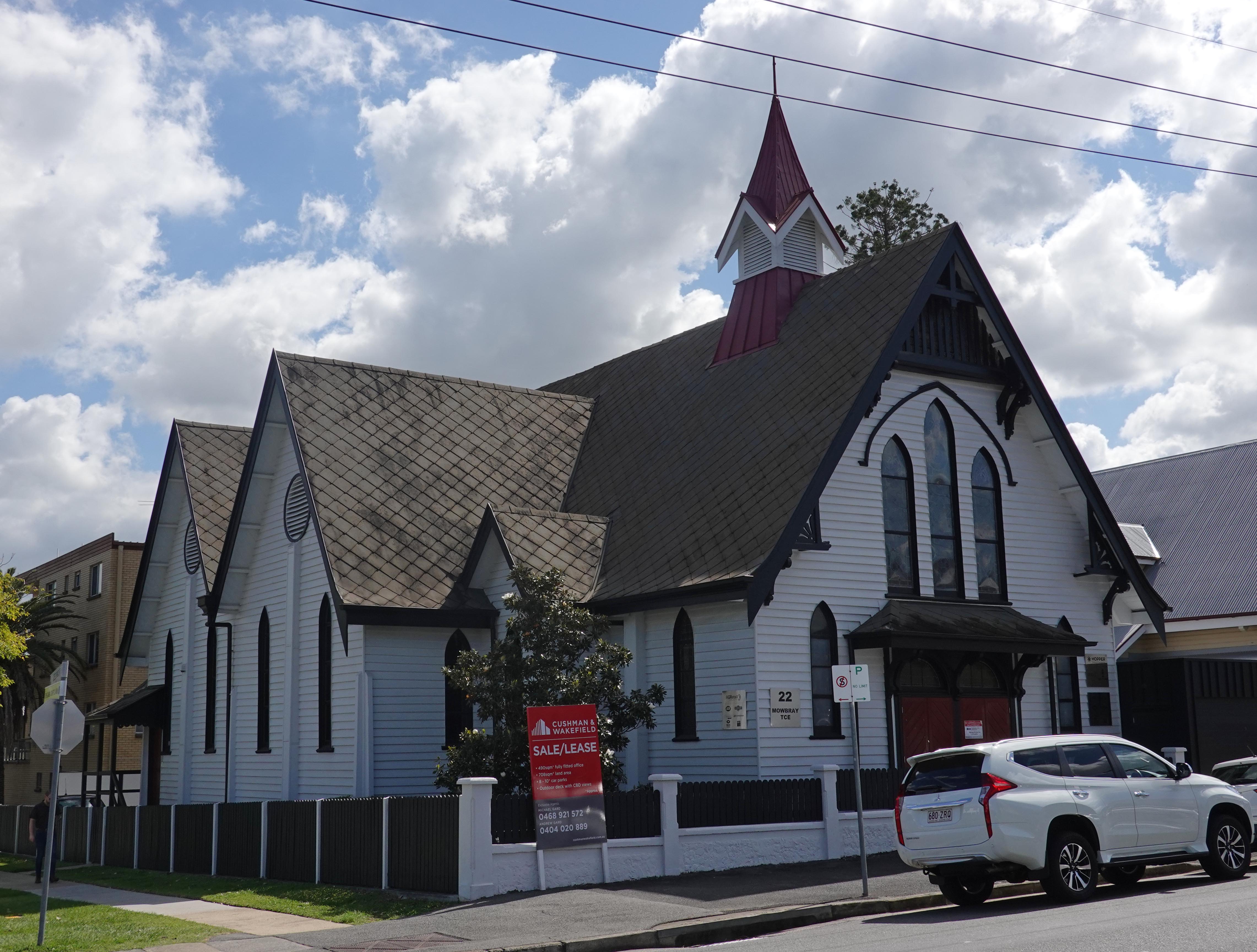 The Ancient Order of Foresters was one of the large Friendly Societies which flourished in 19th century British society, providing financial benefits to members and their families in times of need. Local branches were called “courts” and Court Foresters’ Hope in Paddington was one of the few courts in Queensland to possess its own hall, designed by Wilson in 1888. 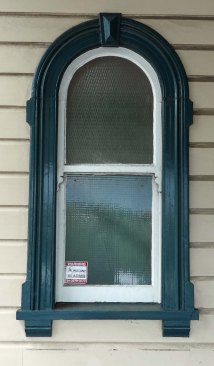 An unusual commission was the design of the gates and wall of the South Brisbane Cemetery in 1888. 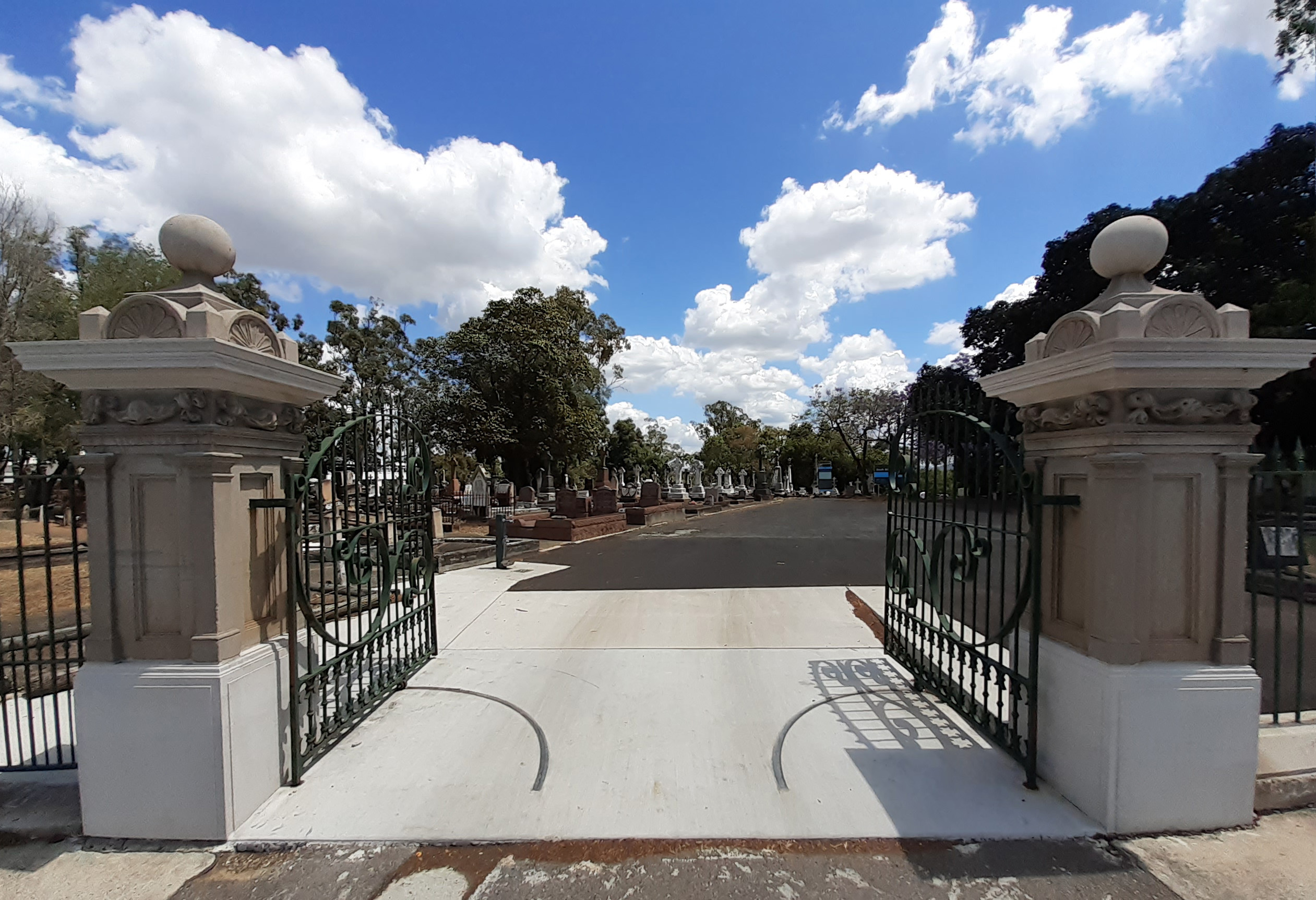 There were still some clients with the money and desire to engage Wilson, by now very well known in Brisbane, to design them grand homes. The 1888 Aldine History of Queensland described him in the following way:  ‘As a Brisbane architect he is now firmly established, and his connection is a growing one”.

“Leckhampton” on Shaftson Avenue was  built for the prominent city jeweller Charles William Snow in 1889/90.

“Como” in Yeronga was built around the same time for accountant and businessman Walter Hayne. 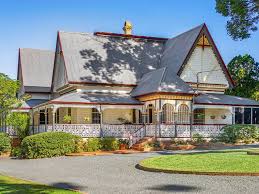 In the 1890s, the depression deepened. The Wilson’s mortgaged their home “Eversleigh” and moved first to Sandgate and later to Nellie’s parents’ old family house “Mountside” on Vulture Street, Kangaroo Point. The family supplemented their income through making and selling jam, collecting bottles and gathering leeches for local doctors!

Things started to look up later in the decade. Wilson became a lecturer at Brisbane Technical College in 1899 and examiner in 1900-01. In 1896 he designed a biscuit factory on Coronation Drive for the Queensland firm Rankin and Morrow, later Morrows. It’s remembered by many as the Arnott’s factory as the companies merged in 1949. 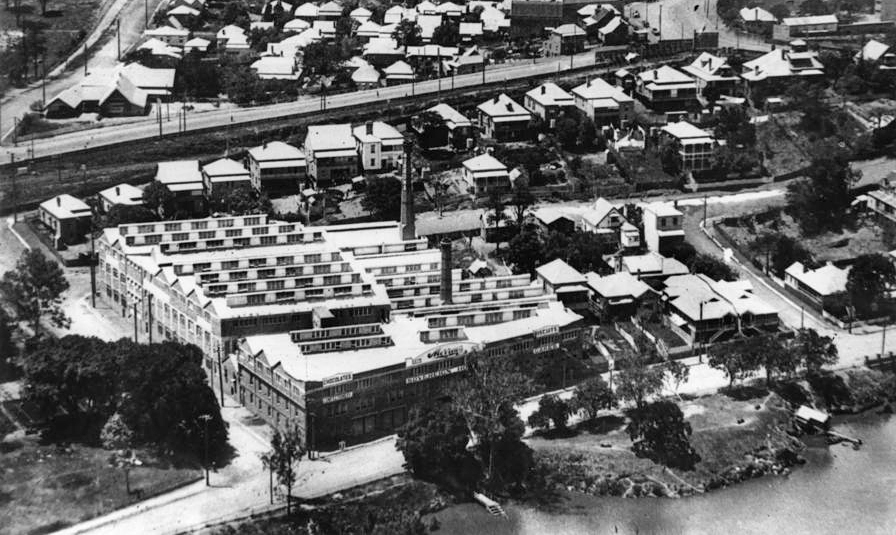 He went on the be involved in some 24 projects for the Morrow family, including  residences for both Henry and Thomas Morrow.  Below : “Ruhamah” built at Hamilton in 1908 for Thomas Morrow. 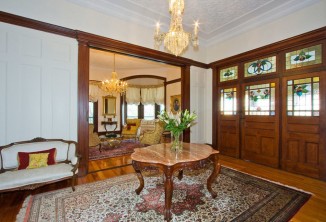 The South Brisbane Post Office was designed by Alexander Wilson’s early employer F.D.G. Stanley in 1881. The Post and Telegraph Office was closed in late 1889 and was repurposed as the South Brisbane Mechanics Institute and Library. It was extended in around 1897, and the third stage comprising a concert hall was designed by Wilson in 1902. Technical College classrooms were included in the basement. 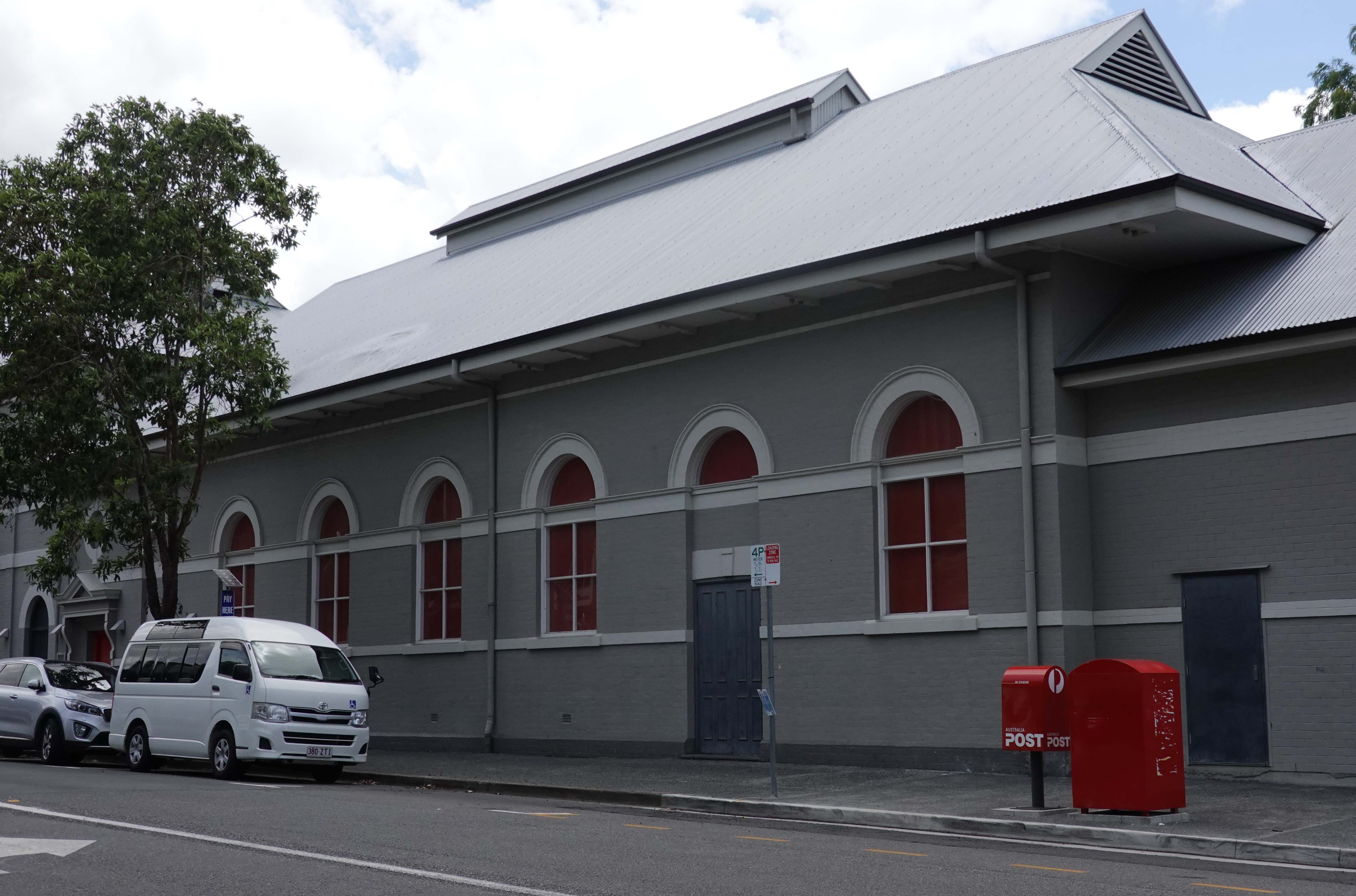 Plans for the Lamb House. (dynamic.architecture.com.au) 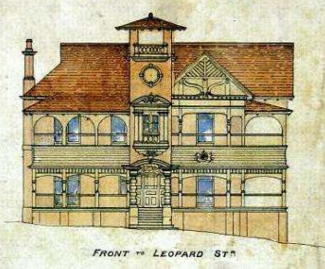 In 2010, “Home”, also known as the Lamb House, was recognised by the Australian Institute of Architects as a nationally significant work. Still in family hands, although threatened by a collapsing roof at the time of writing (2021), its future remained uncertain.

Alex Wilson was involved in numerous projects for charitable institutions. A prominent example was the YMCA building constructed in Edward Street in 1908. Others included the Seamen’s Institute, the City Mission and the Blind, Deaf and Dumb Institute.

The YMCA building in Edward Street, between Adelaide and Ann Streets, ca. 1912. (State Library of Queensland)

In 1918, he read a paper to the 2nd Australasian Town Planning Conference entitled “Domestic Architecture for Tropical and Subtropical Australia.” in which he espoused the learnings of his long experience designing houses for Brisbane residents.

He stressed the importance of airflow given Brisbane’s prevailing wind directions and the planning of thoroughfares to distribute fresh air. He also mentioned the separation of houses, keeping the house above ground to avoid damp, fan lights over doors, the use of casement windows instead of the old sash types and the suitability of wood to our climate. He did envisage a future for concrete.

Two of Wilson’s later and contrasting home designs can be seen in Kidston Street, Ascot. At number 11 is the home designed in 1912 for engineer and university lecturer Percy Weston.  Next door, “Bentong” at number 5 was designed in 1916 for Professor Hawken, head of the Engineering Faculty at Queensland University. 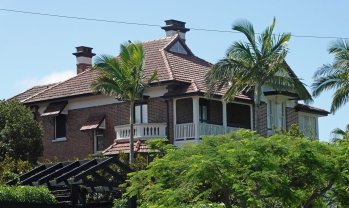 He also worked on a number of commercial projects including Burns Philp in Mary Street and warehouses for the Bullmore Estate in Roma Street. The Brisbane City Council cites Magee’s Emporium constructed in 1928 on Stanley Street as one of Alexander Wilson’s last works before retiring.

Alexander Wilson retired in 1928, leaving the firm in the capable hands of his son Ron. After a retirement filled with painting and playing bowls, he passed away at “Cumbrae” on 5 May 1938. Wilson had seen Brisbane grow from a tiny settlement to a city with its own unique architecture, to which he made a major contribution. Fortunately, most of his surviving work is protected by heritage listing.

2. Wilson Architects, “A. B. Wilson”  http://www.wilsonarchitects.com.au/ab-wilson