The British Army troops that served as convict guards and later constables left Brisbane in 1850, after 26 years. In 1869 all remaining British Army units left Australia, leaving only a Royal Navy station.

The first Queensland volunteer force was founded in 1860 but suffered from under-funding by the cash strapped Queensland colonial government as well as the complacence of a small population far from the rest of the world..

Attitudes began to change in 1877 with heightened tensions between the Great Powers in Europe and the perceived threat of an expansion of the Russian Empire into the South Pacific.  New South Wales suggested an inter-colonial review of defence which was joined by Queensland and other colonies.. The subsequent report of Colonel Sir William Jervis and Lieutenant-Colonel Peter Scratchley recommended a strategy of costal fortifications, a small naval force and mobile land forces. This lead to the establishment of  Fort Lytton  in Brisbane amongst other coastal forts and funding for the establishment of a viable volunteer force.

The gunboats Gayundah and Paloma, the first elements of the Queensland naval force, are seen here at anchor on Town Reach in 1886. (State Library of Queensland)

Colonel Scratchley stayed on in Queensland for some time and later visited regularly. In 1879 he was in Brisbane overseeing a military exercises involving volunteers in various locations such as Eagle Farm, Nundah and in the Highgate Hill area. 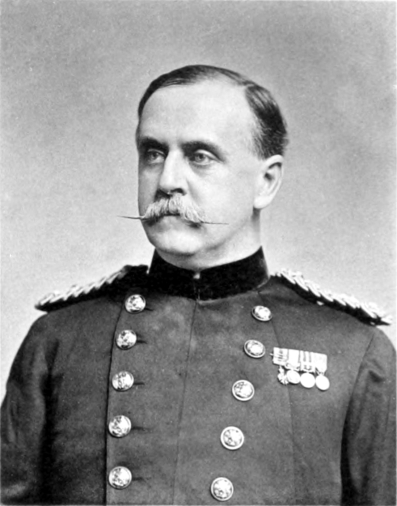 These exercises attracted numerous spectators, eager for entertainment in the small settlement of Brisbane which lacked a variety of weekend pastimes.

At 4.30pm on a hot Saturday afternoon in February of 1879, two groups totalling over 600 men including Numbers 1 and 2 Field Batteries with 8 guns marched across Victoria Bridge to South Brisbane, under the watchful eye of Colonel Scratchley mounted on his horse at the end of the bridge.

No. 1 & 2 Batteries from the Queensland Volunteer Artillery camped at Shorncliffe. (State Library of Queensland)

The exercise was to involve an attacking and defending group with capture of Brisbane’s only river bridge being the objective. 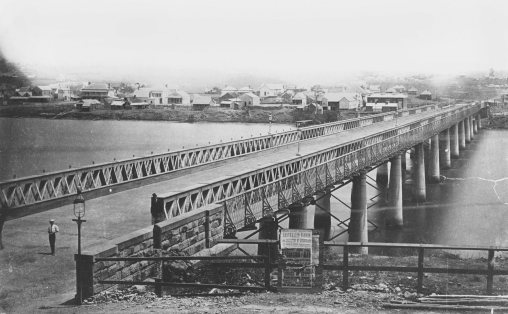 The men were drawn from a number of volunteer groups from Brisbane and Ipswich as well as groups of school cadets. Officers were usually managers in civilian life. For example, the attacking force in this exercise was led by Major Edward Drury. He rose up through the ranks from bank clerk to manager of the Queensland National Bank, controversially making large loans without collateral to the Premier and himself. Later as a Colonel he became commandant of the Queensland Defence Force.

The attackers led the way and after marching down Melbourne Street for a distance headed off up the “Old Cemetery Road” which was probably today’s Gladstone Road or Hampstead Road.

After leaving 2 guns in the Highgate Hill area they “made their way through bush paddocks and unfrequented roads to the ridge on which stands St. Killian’s College”. This is the site of today’s St Laurence’s College on Stephen’s Road.

At the time, the Highgate Hill area comprised mainly farms, gardens and cleared bushland. In 1879, although the area had long been subdivided, there were few houses. It wasn’t until the 1880s that home construction started to pick up pace. see, for example, my posts  The Blakeneys of Highgate Hill and The Hazelwood Estate, Highgate Hill 1885 .

The defending force was heading up towards Highgate Hill when the two guns left behind by the attackers opened fire, creating a diversion. The defenders headed towards the guns and were then exposed to fire from the other two guns by then mounted on St. Killian’s Hill. A number of skirmishes then ensued between the opposing forces, somewhere near today’s Gladstone Road.

Detail from a 1881 lithograph of Brisbane showing key locations in the “Battle of Highgate Hill”. (State Library of Queensland)

The watching crowd rushed from spot to spot following the clearly visible white helmets of the troops, looking for a good vantage point from where to watch the spectacle.

Whilst many appreciated the entertainment, others thought it all a waste of money better spent elsewhere. Colonel Scratchley was paid £250 a year for his visits and the total annual cost of Queensland land forces was said to be in excess of £7,000. One detractor wrote the following later in 1879.

Time for a beer

To the disappointment of the many on-lookers, the exercise came to an end in the early evening. After all the running around in the hot February afternoon, those from out of town were seeking refreshment. 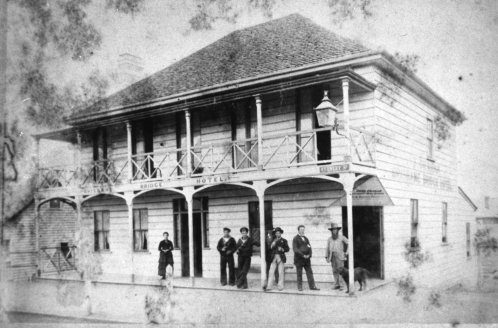 The Brisbane Bridge Hotel in Stanley Street ca. 1878. This was no doubt one of the locations the hot and thirsty volunteers flocked to. (State Library of Queensland)

A Queensland Defence Force was formed in 1885 with some permanent members, a militia force paid for hours spent at drill and training and unpaid volunteers. 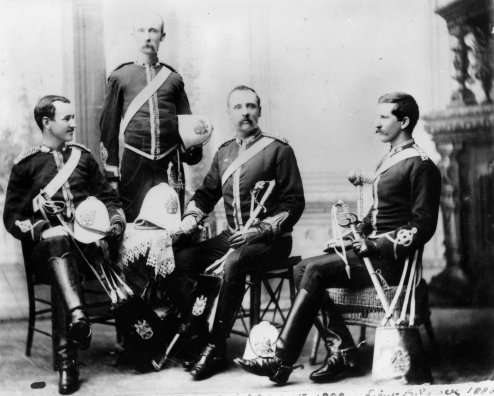 Officers of the Queensland Defence Force in 1885. (State Library of Queensland)

As well as Fort Lytton National Park , you can visit the Army Museum of South Queensland.

There is a lot of interesting detail in the  book ‘A Most Promising Corps’ : Citizen Soldiers in Colonial Queensland, 1860-1903  ‘

5 thoughts on “The Battle of Highgate Hill”