From 1891 until 1978 Highgate Hill shared a railway station at Gloucester Street with Woolloongabba, but now it’s just a memory.

In 1884, Brisbane’s first southside railway line was built in response to the urging of West Moreton coal mine owners. They wished to be able to export coal by ship from Brisbane’s deep water river port. The new line ran from Corinda on the existing Ipswich line, through Woolloongabba and a tunnel under Vulture Street, to the South Brisbane wharves. There was a station at Woolloongabba.

The South Brisbane coal wharves in 1889. (State Library of Queensland)

A further railway line from South Brisbane was built to Loganlea in 1885 and was extended to Southport few years later. The Cleveland line was opened in 1888.

The resulting growth in passenger traffic caused some complaint.  The passage through Woolloongabba was slow as trains traversed five level crossings and had to be preceded by a guard with a red flag and hand bell in some locations. The increased number of trains also meant that risk of injury was higher.

It 1890, it was decided to build a new line to South Brisbane to allow passenger traffic to bypass Woolloongabba. The original line continued in use until 1969 carrying, amongst other things, wheat and limestone for local industries.

There was also an extensive railway depot at Woolloongabba, taking up a large amount of space on the north side of Stanley Street. These days, this area is occupied by State Government offices and a busway.

There is a fragment of the old Woolloongabba line remaining in the grounds of the Princess Alexandra Hospital near Dutton Park Station.

The map below dating from 1920 shows the two lines in black, with the original line passing through Woolloongabba and the new line below it.

This 1920 street map shows the old and new railway lines in black. (State Library of Queensland)

The new line included stations at Park Road, Gloucester Street and Melbourne Street and was opened on the 21st December, 1891.

Soon it became apparent that the Gloucester Street station was awkwardly placed and in 1891 even before the opening of the line, moves were afoot to move it to Vulture Street.

Burke’s Hotel where this protest meeting was held was later known as the Red Brick Hotel.  According to some sources,  this was due to the bookies who used to work from there dealing largely in red ten pound notes, known as bricks. 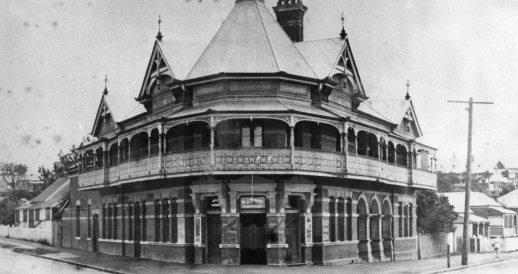 Burkes Hotel, later known as the Red Brick, circa 1929 (State Library of Queensland)

In January of 1898 Charles Yeo, a well known figure in Brisbane at the time, dropped dead at Gloucester Street station, it was thought from heat apoplexy. He’d been a chemist in Queen Street for some time and had recently taken over running the Moreton Bay Oyster Company.

The surrounding area was being subdivided around that time which could have been expected to increase usage of the station. One example from 1890 was Stephens’ Paddock Estate adjacent to the station. For more information on this development, please see my post,“Dorra Tor” – Plywood, Politics and Punters . 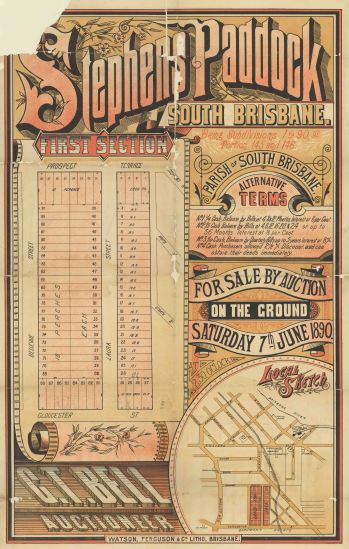 However the number of passengers using Gloucester Street appears to have remained low, judging from this article from 1909. An association for the development of Woolloongabba had been formed some years earlier and was agitating for a passenger railway line via a new tunnel to the Gabba which would have necessitated the closure of Gloucester Street.

Henrietta and James Denham arrived in Brisbane on the “Golden City” in 1865. James soon found work at the

Ipswich Railway workshops. Pulleys and belts on a drive shaft can be seen at the left. (State Library of Queensland)

recently established Ipswich Railway workshops  where he was employed as a belt maker. Power from the workshops’ steam engines was distributed via a system of shafts, belts and pulleys which required ongoing maintenance.

Belt makers were often called on to make repairs whilst the machinery was still running to avoid shutting down part of the workshops. In 1872, James had an accident while repairing a belt on a running shaft, while working from the top of a ladder. His right arm was severely damaged when it was drawn around the shaft. The doctors at Ipswich Hospital decided to amputate the arm above the elbow.

The following year, the couple opened the teetotal “Good Templar Hotel” in Nicholas Street, Ipswich. Henrietta ran the hotel, while James ran a fruit and vegetable shop collocated with the hotel. They were both members of the International order of Rechabites which promoted total abstinence from alcohol.

This doesn’t seem to have been a success, as it closed after 12 months. James was re-employed by Queensland Railways in 1880, working as the gate keeper at Booval. In 1890 he became the Station Master. However, he progressively lost his eyesight and was unable to continue working.  He resigned from the Railways in 1893 and eventually became completely blind.

By 1895, Henrietta was working as a booking clerk and in around 1897, she became the Station Mistress at Gloucester Street Station. By this time, her family had grown up with the youngest of her 10 children, Cyril, aged 14 . Like many of the family he started working for the Railways, initially as a lad porter.

There were only a handful of Station Mistresses at the time and they were paid just £52 a year, less than half the remuneration of their male equivalents . The couple were provided with accommodation in the Station Master’s house next to the station in Gloucester Street. Henrietta held this position until 1918, when she retired due to ill health at the age of 77. James passed away at their home nearby in Gloucester Street in 1902 and Henrietta in 1919.

In 1927, it was decided to reroute the Sydney- Brisbane standard gauge line via Kyogle. This required a new tunnel at Gloucester Street.

The 1928 interstate tunnel is on the left and and the original 1890 tunnel on the right. (P. Granville)

Work place safety at that time left something to be desired. 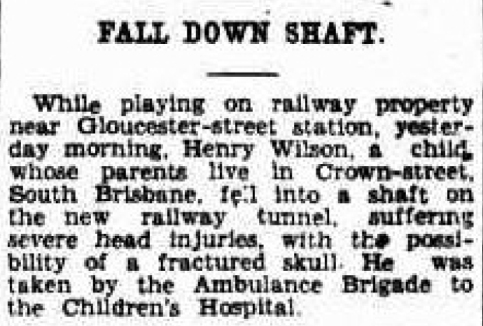 In 1937, another boy fell off the platform whilst playing into the path of an oncoming train. The driver was able to stop the train just in time. Then in 1938, another boy again was gathering flowers in Frith Street at the top of the tunnels and fell to the track below, fracturing his pelvis.

Apart from a few attempts to rob the ticket office, these are all the traces that Gloucester Street Station has left in history.

The demise of the station

The death knell came in 1978 with the electrification of Brisbane’s rail network. This required a longer platform than could be accommodated without expensive work at either the tunnel or bridge end of the station. Someone who travelled via the station told me that even before electrification some trains were too long for the platform and had to edge forward after a pause to allow passengers in the rear carriage to alight.

A railmotor at Gloucester street in 1977. (Weston Langford)

The next time you walk down Gloucester Street, have a peek over the fence at where the station stood and spare a thought for times past.

A train speeds past Gloucester Street in 2018. (P. Granville)