When, in 1916, the 42 year old Reverend Douglas Price was found dead in his house in Rosecliffe Street Highgate Hill, a short but fascinating life had come to an end.

He was born into a Quaker family in Birmingham in 1874, one of 2 sons and 5 daughters of Samuel Price and Caroline Southall. When he reached the age of 18, he felt compelled to become a member of the Anglican Church. He was unable to explain why, other than suggesting that the colour and music associated with the church made him feel that those involved had a fuller perception of the revelation of God. 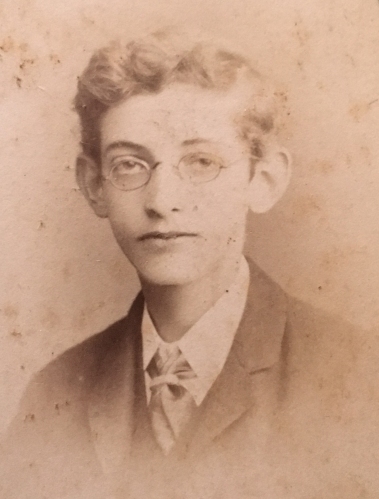 Four years later, he left his business to study at Durham University and subsequently was ordained in the Anglican Church. He arrived in Brisbane in 1903 to take up a role as lecturer in the Anglican Theological College. Before long, his unorthodox religious beliefs such as questioning the resurrection of Christ, led the archbishop, St Clair Donaldson, to ask him to resign.

Rector of All Saints

Around that time, the parish of All Saints church asked Price to become their rector and the issue of his increasingly unorthodox beliefs was avoided for the time being. He had already been associated with this church for several years. 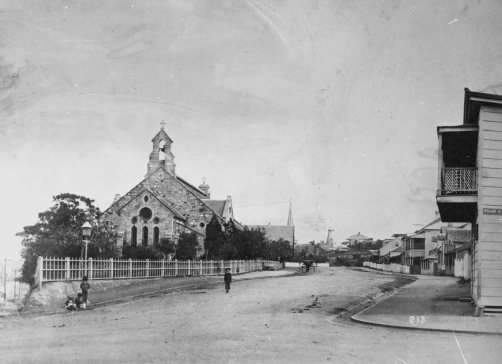 All Saints on Wickham Terrace was the parish church of central Brisbane. Originally built in 1862, in 1869 it was largely rebuilt in the form that exists today, making it Brisbane’s oldest surviving Anglican church.

All Saints Church was built in 1869 and is Brisbane’s oldest Anglican church.

The Reverend Douglas Price became well known for his sermons. He also continued to give the weekly public lectures he had commenced a few years earlier on subjects such as poetry, philosophy, literature and history, often dressed in University gown and hood.

He published a quarterly journal called “The Cygnet” which further expounded his developing ideas. He’s reported to have spent a lot of time in schools and assisting the poor. As the parish had insufficient funds to afford to employ a curate to assist him, he was extremely busy.

There was ongoing conflict with Archbishop Donaldson who wanted to close All Saints as Brisbane’s new Anglican cathedral was planned to be built very close by. The Archbishop wanted to maximise the size of the congregation and increase income for the new cathedral building fund. 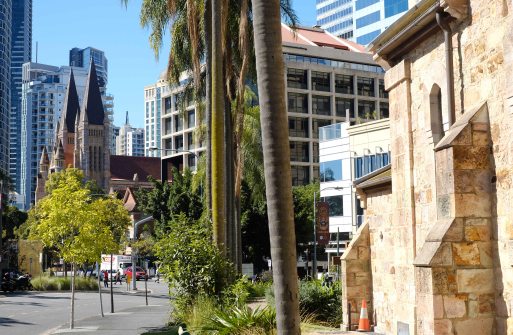 In 1906 a proposal from the archbishop to sell All Saints was rejected by the parish congregation by 200 votes to 9. There was also at this time a bequest to All Saints parish that had been contested by the Synod. This finally was resolved in the parish’s favour in 1910.

Shortly after this, the Archbishop asked Price for copies of his sermons and subsequently asked him to resign. There was some suggestion that this was due to the issue of the disagreement over the future of All Saints Church. However Price’s beliefs had continued to drift further into what was called Modernism. In a word. he believed that Jesus was first amongst the sons of God but was not God the son.

Despite the issues with his theology, the people of the parish were strongly behind him and they petitioned the archbishop to withdrawal his request for Price’s resignation, without success.

He was extremely popular due in part to what was described as a magnetic personality and an ability to speak publicly in an extremely convincing way.

In researching this story in the State Library of Queensland,  I came across a personal  obituary hand written by Alys Missing, inserted into a copy of one of the periodicals edited by Douglas Price.

” On hearing him for the first time well might we exclaim with the old philosopher when he heard Plotinus, “This is the man I have been seeking”. His was a chiming soul with syllables of fire“.

His forced resignation was reported as far afield as London. Price left for Europe in 1911 after resigning, but later in the same year he returned to Brisbane at the request of his many followers. He established a Progressive Christianity or Modernist Group and held well attended services twice a week. 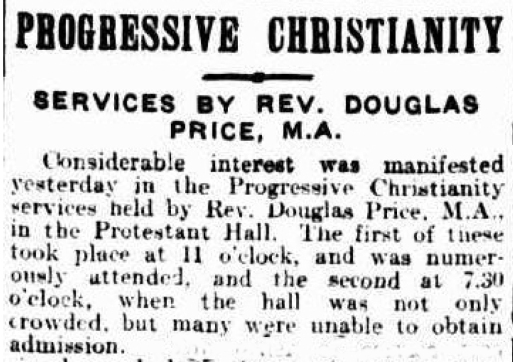 Dr A. Jefferis Turner ( see my post Doctor A. Jefferis Turner – “Gentle Annie”  ), the President of the Society and another Highgate Hill resident, wrote in his introduction to the first edition of the periodical  “Forerunner” in 1914 that the membership comprised

“Christians and Theosophists, Spiritualists and Rationalists, Sceptics, Agnostics and queer sorts of Dogmatists, and cranks of all sorts”.

The Modernist Society later had a library and office in rooms in Moore’s Chambers which stood opposite the GPO at 282 Queens Street where Post Office Square is now located.

Sunday services were held in the School of Arts and there was a choir, discussion guild and a Ladies Modernist Club.

In his remaining years, Price had a lot more free time than when he was an overworked rector. He published two periodicals, “The Forerunner” and “The Modernist” and wrote three books.  “The Earthly Purgatory”, published in 1912, was described by one reviewer as “an autobiography of a soul”. “The Soul of Judas” published the following year is a book of short stories.  “One of a Crowd” from 1916 is a novel based on true events concerning a young Brisbane woman. The books contain much of his philosophy and observations of others. 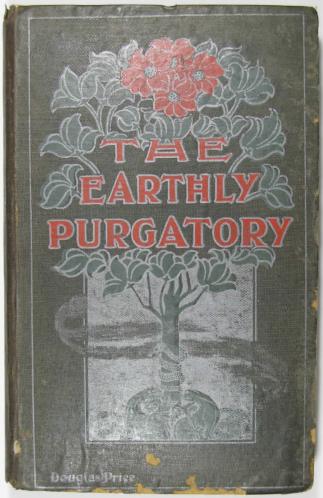 The text of “The Earthly Purgatory” can be found here.

He also built a home in Rosecliffe Street , Highgate Hill which he called “Puck’s Palace. From a study of successive Post Office Directories, I believe that the house is most probably number 41.

As well as being an author, Price was also gifted musically and artistically and his house had internal black and white decorations painted by him. This frieze in his study was described as being a representation of his philosophy and was still preserved in 1929. 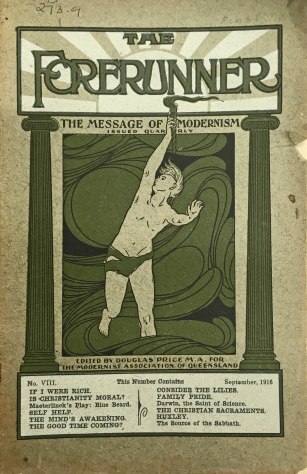 The cover of the “Forerunner” periodical  designed by Douglas Price. (State Library of Queensland)

Price took a strong anti-war stance and in August 1915, he chaired a meeting entitled “Christianity and War” decrying the situation in Europe.  Margaret Thorp, visiting from Tasmania, also spoke. Soon after, she moved to Brisbane and became a close friend of Price’s and a leading anti-conscription figure.

In December of 1916, Douglas Price was found dead at home by a friend who had come to visit. He was a believer in eugenics and had decided not to marry and have children and he lived alone.

One newspaper stated that there was no sign of foul play and that he had seemed to have died of natural causes. Another euphemistically reported that he had died in his sleep.

My interest piqued, I obtained his death certificate issued after an autopsy, which states that he died from a severed brachial or upper arm artery, haemorrhage and syncope. Given that there was no police investigation, it’s certain that he committed suicide, probably by slicing through his underarm. Price suffered from a long term painful illness which may have been a cause of his decision to end his life.

Just months earlier he had written the following in the ‘Forerunner’ periodical in the context of the war then raging in Europe. Does this argument against suicide represent his troubled mind at the time?

“Some will probably despair of this world and transfer their hopes to a future sphere. It is good to hope for better things beyond the silence of death. But our first business is here and now, and we have no right to neglect our mundane duties that we may selfishly dream of eternal bliss.  I have no wish to pour scorn on anyone’s post mortem dreams. I have some myself. But religion is surely the making of things better in this world. And now the call is upon us to seek to save the high things already secured.”

A 1929 newspaper article on Highgate Hill  unexpectedly devotes half its column space to a description of Price and was obviously written by a close acquaintance.  The author makes the following comment on Price’s death.

“His passing, like his life, was tinged with the unusual. Like a Roman senator who had incurred his Emperor’s displeasure he expiated, in the old Roman way, his failure to adjust himself to his environment.” 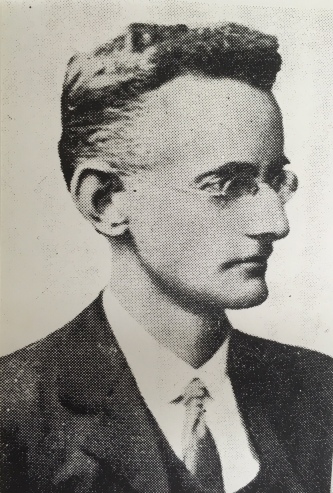 A fragment of the personal obituary I found inserted in a copy of one of Douglas Price’s periodicals. (State Library of Queensland).

A yearly Douglas Price Memorial Lecture was held for some years from 1920 and presented by distinguished academics.  In 1921, the lecture was presented by Elton Mayo, Professor of Psychology and Philosophy at the University of Queensland. Another blogger has discussed this in her post ‘Civilisation and the Inner Self’ .

A 1921 newspaper article regarding this lecture  by an acquaintance gives us a glimpse of his character.

“Douglas Price’s love for the beautiful in life was his most vivid characteristic – beauty of mind, physical beauty, lovely words that blaze like jewels, music that frees the soul, art, nature, truth, kindness- all these things were to him just God.”

The article mentions that without a successor, the Modernist Movement in Brisbane had become ‘moribund, if not dead’.

One of his obituaries stated that had Douglas Price lived anywhere but Australia, he would have had a world wide reputation, but he is now all but forgotten.

His fallen tombstone can be found in the South Brisbane Cemetery. 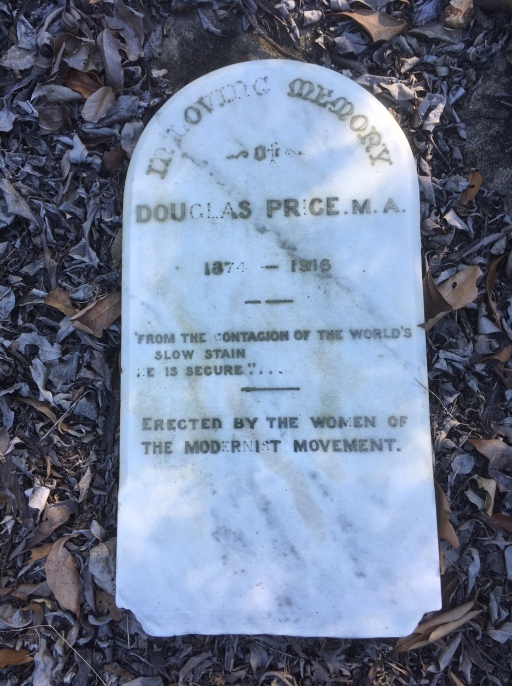