In 1876 Simon Fraser and his wife Lucy Anne nee Simpson built their house “Torbreck” on the crest of Highgate Hill. In 1932, an article describing the house, appeared in  The Queenslander magazine. It was number 89 in a series of 136 articles on Brisbane’s Historic Homes written by Florence Elisa Lord. A very interesting  listing of these articles has been compiled by Kerry Raymond.

The article tells us that Torbreck means “the brow of the hill” in Gaelic and reflects Fraser’s highland Scottish origins. It was the first house built on the northern side of Dornoch Terrace and was described as a pretty house with extensive gardens. Unfortunately the image that also appeared in the “Queenslander” is of poor quality.

In this photo taken in 1876 from Wickham Terrace by Max Klose, Torbrek is visible as a lone house on Dornoch Terrace.

Detail from a photograph taken by Max Klose in 1876. (University of Queensland)

Simon Fraser was a well known auctioneer and represented various electorates as a member of the Queensland colonial Legislative Assembly. After he died in 1889, Lucy Fraser sold the house to the Praeger family and rented our house , the subject of a previous post Glenview – A Highgate Hill House circa 1883, for several years. She passed away in 1930.

The houses existing in 1926 along this section of Dornoch Terrace are shown in number 79 of the Brisbane City Council historic Detail Plans. Only three of these remain today – Mardon Flats now once again a private home, Clova and The Summit which has been incorporated into a recent development adjacent to the park described in a previous post in this blog, Highgate Hill Park.

Interestingly, there were plans in 1937 to build a set of flats at 182 Dornoch Terrace which is the site of Torbreck . These were described in  an article in the Telegraph newspaper which described an increase in the “flat-habit” in Brisbane as being driven by a general desire for easier living, coupled with an acute problem of obtaining competent domestics and satisfactory houses to let.

From a study of Post Office and Phone Directories in the years after 1937, it would appear that these flats were never constructed. It’s interesting to speculate whether the high rise Torbreck would have been built if this 1937 proposal had proceeded.

Title to the land at 182 Dornoch Terrace passed to Torbreck Pty Ltd in 1958 and construction of Queensland’s first multi-storied home unit development took place in the period 1958 to 1960. This was a totally new concept for Brisbane,  with each of the 150 home units having at least one private balcony,  electric kitchen, sewerage and garbage disposal facilities, washing machine and clothes drier. Softened water was provided via storage tanks on the roof, and the latest in automatic lifts provided.

The original concept also included some features which did not come to fruition including  shopping facilities and professional suites at ground level, a basement laundry service, a terrace café,  roof and indoor gardens, a tennis court, putting green and fully equipped children’s playground.

Being 14 floors high and located almost 70 metres above sea level, Torbreck quickly became a Brisbane landmark,  visible from many parts of the city. It paved the way for the development of high rise living in Brisbane. 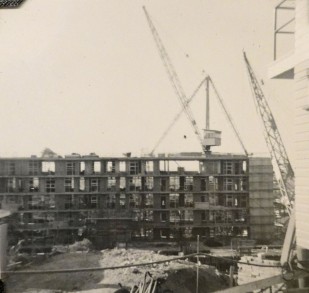 Torbreck is heritage listed, being considered  an important example of post- war international style architecture, modified to suit local conditions. Historical documents relating to the building can be found at this site.

An aerial view of Torbreck in 1960 (State Library of Queensland)

One thought on “Torbreck”