For generations now Highgate Hill residents and visitors have enjoyed the views from the peak of the Hill which is around 63 metres above sea level.There are in existence a number of photos taken from this vantage point in earlier days. For example, this one was taken looking towards the river and St Lucia during the 1893 flood. The three chimney pots of our house by the way, can be seen just to the right of the two women (see Glenview – A Highgate Hill House circa 1883 ).

This view from around 1889 is towards the north- east, with Gardens Point and the Kangaroo Point cliffs visible in the centre distance.

The view is very different today!

For some years from around 1900, Alderman John Davies had been promoting the idea of the South Brisbane

Municipal Council purchasing vacant land at the top of Highgate Hill to create a park. In 1900, he had been successful in leading efforts to secure land on the river to create what later became known as Davies Park (see my post The Davies Park Story ).

In 1903, the South Brisbane  Council was made an attractive offer for 1 acre 23 perches (around 4,600 square metres) on the summit of the hill by James Wilson. The Wilson family were early European settlers on the hill and their house still stands adjacent to the park (see my post Alexander Brown Wilson, Architect. ) The council proceeded to buy the land however in August of the following year there is a newspaper report to the effect that the Council had still not finalised payment!

Luckily for Brisbane, the purchase was completed. The £1,250 paid is roughly equivalent in buying power to around $180,000 today – a good deal indeed although this calculation is based on the Retail Price Index and not on land prices specifically.  Another property bought at the time was around 12 acres at East Brisbane sold to the Council by John Mowbray for £6,000 to establish today’s Mowbray Park.

In 1911, the shelter which still graces the park was erected. The required funds of around $30 had been raised over a few years by a group of South Brisbane ladies who held a series of concerts in the West End School of Arts.

The park shelter dates from 1911

The prominent position of Highgate Hill has lead to its suggested use for various purposes.

In the years immediately after the end of World War One, communities throughout Australia began planning the erection of memorials to those who served and in particular to the tens of thousands of dead.  In 1919, Highgate Hill Park was the main contender for the erection of a memorial in the Kurilpa State electorate which encompassed West End, Highgate Hill and Dutton Park.

This proposal never proceeded however a clock with Westminster style chimes  was installed in the clock tower of the Kurilpa School of Arts (now the Kurilpa Library) in 1928 as a war memorial. Funds were raised by the Kurilpa War Memorial Ladies Committee. For more on the library and School of Arts building which stood next to it, please see my post The West End School of Arts .

The clock tower of the then West End School of Arts under Construction ca. 1928

The Roll of Honour in Kurilpa Library

There was another proposal in 1933 to erect a beacon on Highgate Hill as a memorial to Bert Hinkler. Whilst the premier, William Forgan Smith, was in favour of the proposal , it never proceeded. Bert Hinkler was a pioneer Australian airman. He made the first solo flight between England and Australia in 1928 in just under 15½ days. The Avro Avian aircraft he flew can be seen hanging in the entrance to the Queensland Museum at South Bank. In 1933, he crashed in the Apennines near Florence, Italy on an attempt to regain the world record for the England to Australia route.

In 1920, during a tour of the Empire to thank those who had served in World War 1, the Prince of Wales, later briefly King Edward the Eighth and then the Duke of Windsor, paid a visit to the park as described in a previous post, The Prince of Wales Visits Highgate Hill 1920.

In 1924, the South Brisbane City Council  installed a ”Direction Dial”. This was a brass plate mounted on top of a plinth with arrows pointing towards various land marks such as the Glasshouse Mountains, Flinders’ Peak and Moreton Island and showing the distance to each of these. The dial was subsequently stolen several times  however it must have been recovered or replaced as I remember it well from the 1980s when we moved into the suburb. Today unfortunately only the plinth remains as the plate disappeared sometime around 1990. 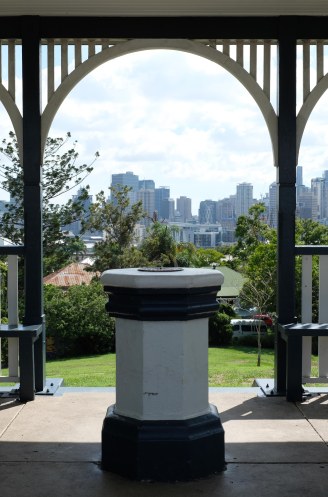 The direction plate disappeared from on top of this plinth around 1990.

Today the park continues to be a popular place to catch the cooling breezes, admire the view, and to hold parties and weddings. It is at its most busy during fireworks displays such as New Year’s Eve and River Fire.

Hopefully continued high rise development of the area won’t eventually destroy these views, which was a fear as far back as 1913 when the South Brisbane Council considered how development might be curtailed to maintain the views to the south from the park.