Queensland Figaro was a weekly newspaper which published a large amount of submitted social news, as well as general news and satirical comment. This is a typical social report, in this case of a party held by 15 year old Vera Baynes, a member of a wealthy Brisbane family. 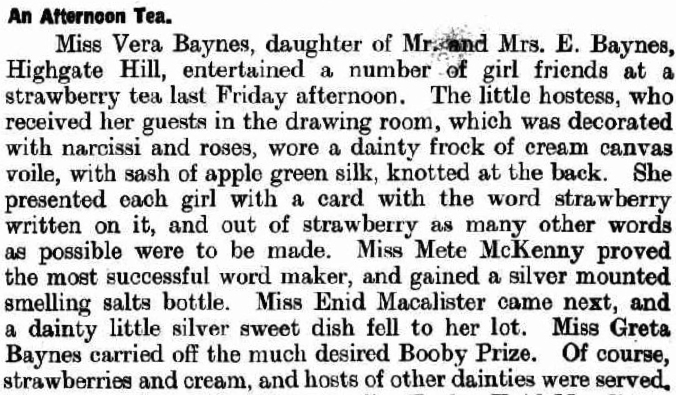 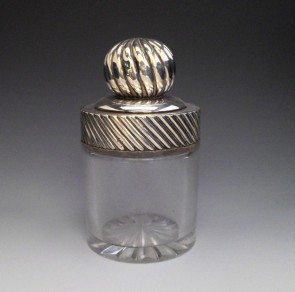 A late Victorian smelling salts bottle, similar to the first prize at the party. (Wikimedia)

Vera was the daughter of Ernest and Annie Baynes.

Ernest was born in South Brisbane. He initially worked as a jackeroo and drover. After 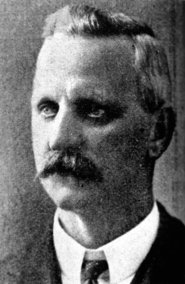 spending some time on the Kimberley Goldfields, he returned to Brisbane and joined his brothers Harry and George who had taken over the family firm.

The Baynes brothers owned around 30 butcher shops in Brisbane and Ernest worked as manager of the retail outlets. Their other business interests included a factory in South Brisbane producing barrels, saddles and vehicles, a fellmongery and wool scour at Murrarie, and a meat processing plant at Queensport.

Despite their apparent success, their company was declared bankrupt around 1897, due to incompetent accounting and excessive personal drawings. In 1898 they recommenced trading. 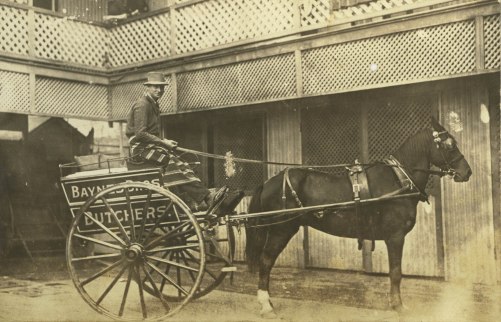 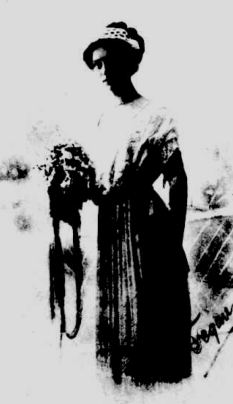 Both Ernest and Annie Baynes were very active in the Brisbane Hunt Club, which due to the high inherent cost of membership, was a quite elite group. 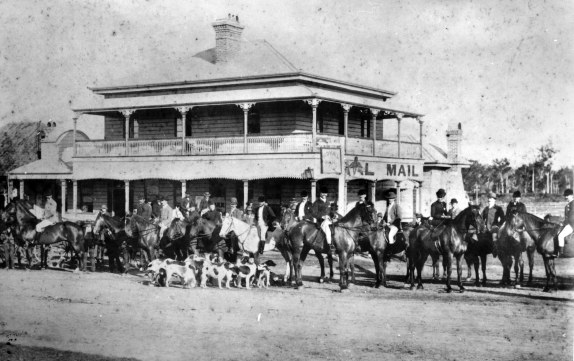 Brisbane Hunt Club in front of the Royal Mail Hotel, Goodna ca 1892. Ernest Baynes is 7th from the left, on the horse facing right. (State Library of Queensland)

Baynes was something of an expert in horses. Vera later recounted how her father was asked to purchase a horse for King George V to use on his trip to India in 1911. After a long search, he chose “Akbar”, from the property of Miss Enid Bell of Coochin in the Scenic Rim area.

Ernest was president of the RNA and until 1920 ringmaster of the annual Brisbane Exhibition. A grandstand was named for him in 1923. Annie passed away in 1927 and Ernest in 1930. 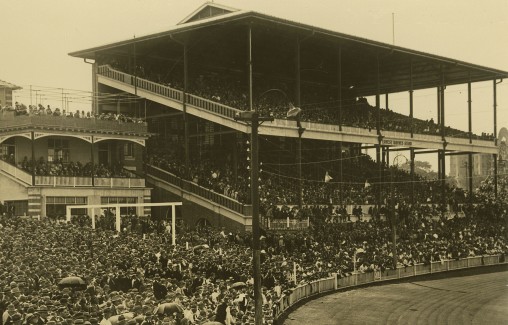 The Ernest Baynes Stand at the Brisbane RNA, 1928. (State Library of Queensland)

In 1912, Vera Baynes married Douglas Currie, a sharebroker, also at St Andrews Anglican Church, which was close to the family home in Blakeney Street. At that time, the inclusion of photographs in newspapers was rare, and there is a typically detailed description in the newspaper report of the bride and other women’s attire.  The Currie’s had a son and daughter. Vera sought a divorce in 1927 on the basis of misconduct, which was not contested by her husband.

In 1934, Vera gave an interview in which she described her memories of the Brisbane Show over the years. In one year, a professional engaged to ride a celebrated ladies’ hack had fallen ill at the critical moment. Vera rode the hack, winning first prize. In their younger days, Vera and her sister Hilda often competed in ring events, always mounted side-saddle.

In another anecdote, she recalled when Comet, a famous horse belonging to her father Ernest, bolted. The article goes on to say :

“Mr. Baynes himself was driving, and Comet, who had just been decorated with the blue ribbon of a first prize, became greatly excited by the plaudits of the crowd. Racing wildly round the enclosure he eventually leaped one of the entrance gates, taking the buggy with him. Conveyance and horse were slightly damaged, but Mr. Baynes, who was thrown clear, fortunately, landed on his feet, and, after a few anxious moments, his daughters were relieved to see him enter the ring again unhurt.”

Vera went on a holiday to Japan with her daughter Barbara in 1937 and passed away in the next year, a few days before her 48th birthday.

A paddock used by the Baynes family for cattle holding was sold in 1887. The subdivision would form part of the future suburbs of Greenslopes and Stones Corner. It includes the western part of today’s Stones Corner shopping strip. 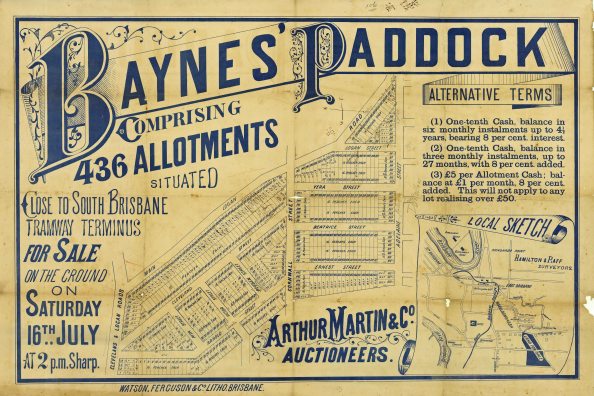 Baynes Paddock subdivision for sale in 1887. The orientation of the map is with north at the left. (Stater Library of Queensland)

Amongst the new streets created in this subdivision are Vera and Ernest Streets which still have those names. This is a little curious as Vera was not born until 1890, three years later. Perhaps the name refers to another family member. It’s not clear where the other street names came from and many now have different names. For example, Adelaine Street at the right of the map is now Juliette Street.

The Baynes family lived in “Tarong” from around 1898 until about 1913. It’s located at the Hampstead Road end of Blakeney Street.  Although the house’s frontage was then on Westbourne Street, it was described in street directories as being on Blakeney Street after that street was created in 1901 ( for more see my post The Blakeneys of Highgate Hill ). 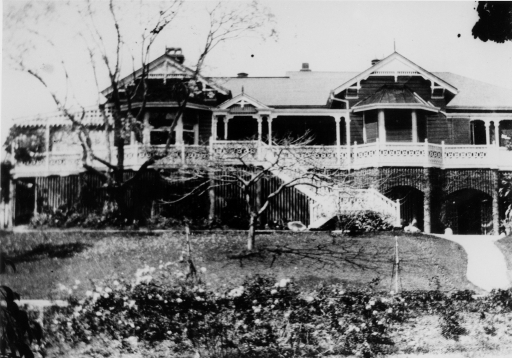 Some photos of the original fence can be seen in another post in this blog, Westbourne St. 1930s Architecture.

Baynes Street, further up Hampstead Road, takes its name from the family, possibly Joseph Baynes, an uncle of Ernest. 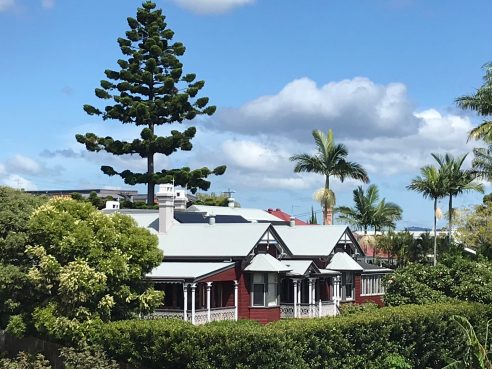 This house was built around 1877 for accountant John Stephens and originally called “Rochemount”. Stephens was at one stage the manager of  ‘The Courier’ newspaper and ‘The Queenslander’ weekly magazine. He was the younger brother of Thomas Blackett Stephens, ( see my post  South Brisbane War Memorial Park and the Disappearing Ridge).

Being a flood plain, the West End/ Hill End area had soil that was very fertile, and many farms and orchards were established along the river bank. ( For a related story, see my post The Origins of Orleigh Park ).  Farms in the area offered a fixed price entry for people to go and pick strawberries.

Smelling salts have been around since Roman times. Their main ingredient is Ammonium carbonate. They became very popular in the Victorian era. This was perhaps due to the fashion of wearing very tightly laced corsets which could bring on a “the vapours” or mild anoxia. Poor nutrition and the stench from the primitive drainage of the period could also have contributed to the popularity of smelling salts.

The Rochemount/Tarong entry in the Brisbane City Council Heritage Register 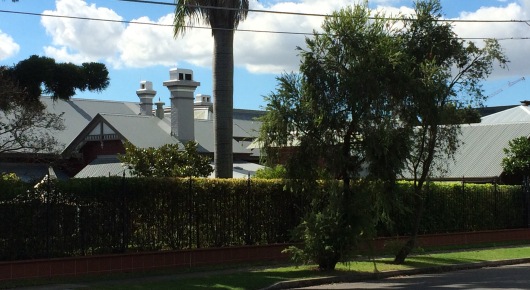 Tarong from the rear in Blakeney Street in 2016

7 thoughts on “A Strawberry Afternoon Tea”